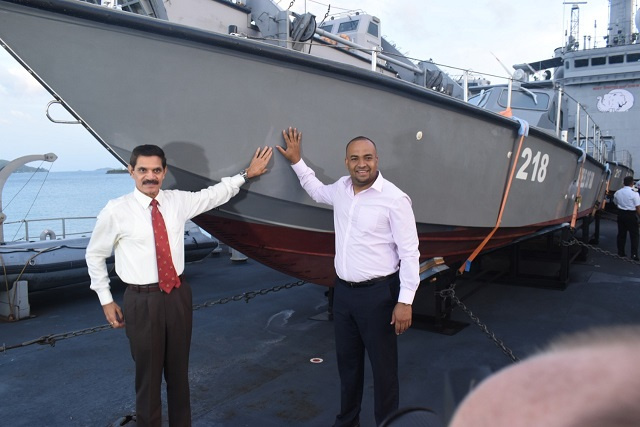 The two wave rider inshore patrol crafts were officially handed over to the Seychelles' Vice-President Vincent Meriton during his two-day visit in Sri Lanka in February last year.

In a reception ceremony on Tuesday, the Indian High Commissioner, Dalbir Singh Suhag said, the vessels could not be delivered earlier due to complexities involved in the transportation and to some extent lack of resources on the Sri Lankan side.

The donations of the two boats followed a request by the President of Seychelles, Danny Faure, during a bilateral discussion held with his Sri Lankan counterpart, President Maithripala Sirisena, in a state visit to Seychelles in October 2018.

At the handing-over ceremony in Sri Lanka last year, Meriton was quoted by the Seychelles Nation as saying "donation of these new wave rider boats to the Seychelles Coast Guard demonstrates yet again the willingness of the Democratic Socialist Republic of Sri Lanka to hold fast with Seychelles in our efforts to safeguard our territorial waters."

This view was echoed by Lieutenant Colonel Jean Attala, the Deputy Commander of the Seychelles Coast Guard.

Attala told SNA on Wednesday that "the addition of this new craft to our fleet will boost our capability to undertake surveillance and the safeguarding of our maritime areas and enhance our capability to deal with various maritime crimes within our region."

The Seychelles' archipelago consists of 115 islands widely-spread over an exclusive economic zone of 1.3 square kilometres in the western Indian Ocean. This makes it difficult for local enforcement authorities to spot illegal activities.

Sri Lanka is already assisting Seychelles in maritime training through an agreement signed with the Colombo International Nautical and Engineering College (CINEC) in August 2013.

Last year, the Cabinet of Ministers approved a proposal for a memorandum of understanding between the Seychelles Maritime Safety Administration and CINEC which will recognise and approve the navigation and engineering cadet training programmes and associated ancillary programmes offered by the college.

Diplomatic ties between the two countries were established in October 1988.