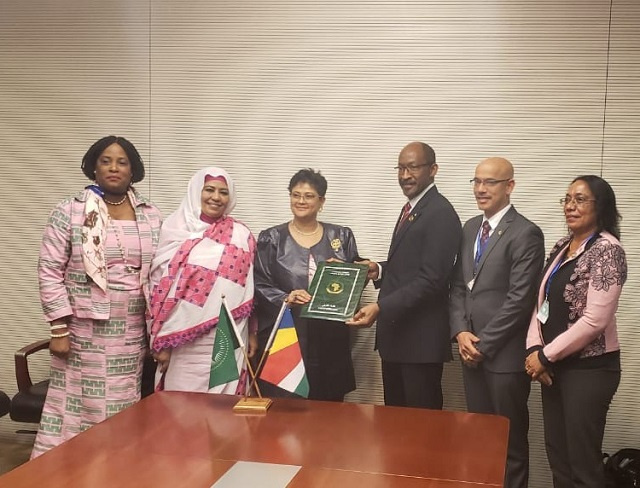 The treaty was signed by Seychelles' Vice President Vincent Meriton on the sidelines of the 33rd ordinary session of the African Union Assembly. (Department of Foreign Affairs)

The treaty was signed by Seychelles' Vice President Vincent Meriton on the sidelines of the 33rd ordinary session of the African Union Assembly taking place in Addis Ababa, Ethiopia.

"Small Island Developing States such as Seychelles often pay a premium for the procurement of essential medical supplies. The smallness of our market and our geographic isolation mean that we are often an afterthought in the business of medicines procurement," Meriton said at the signing ceremony.

Meriton said that "being the 13th Member to sign this Treaty, Seychelles takes this opportunity to call on other African nations to come forward and give the support needed to operationalize this much awaited and long overdue endeavour."

During the weekend, Seychelles, an archipelago in the western Indian Ocean, acceded to and became the 40th member of the African Peer Review Mechanism.

The document was signed by Meriton at the opening session of the 29th African Peer Review Forum of heads of state and government on the sidelines of the African Union Summit in Addis Ababa, Ethiopia.

Seychelles' accession to the African Peer Review Mechanism was approved by the Cabinet of Ministers last year as part of the government's continued efforts and commitments to promote good governance, transparency and accountability in the country.

After the signing, Meriton emphasised that the political maturity of Seychelles is reflected through the commitment of President Danny Faure to ensuring the establishment of credible and trustworthy institutions built on principles of transparency and accountability for shared prosperity.

"The existing cohabitation between the governing party and the opposition with the majority in the National Assembly depicts the determination of the Government and the people of Seychelles to work towards a shared vision through engagement and dialogue," he said.

The African Peer Review Mechanism, established in 2003, is an instrument voluntarily acceded to by member states of the African Union as a mutually agreed African self–monitoring mechanism.