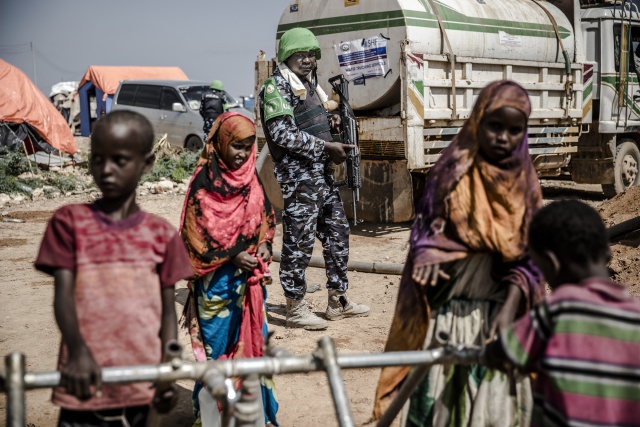 A Nigerian Policeman deployed in Somalia as part of the African Union peacekeeping mission patrols while looking at a group of children getting water from a water distribution point at a displacement camp for people affected by intense flooding in Beledweyne, Somalia, on December 14, 2019. The rains have inundated big areas surrounding Beledweyne area forcing thousands of people to leave their houses and look for humanitarian assistance while living in displacement camps. Due to climate change and human activities, cycles of floods and droughts have become more recurrent and completely unpredictable in Somalia exposing hundreds of thousands of people every year to vulnerability and displacement. (LUIS TATO / AFP)

(AFP) - African Union leaders vowed on Monday to push peace efforts in Libya, a sign of the bloc's desire to play a bigger role in resolving the continent's conflicts.

The AU leadership has complained about being overlooked in Libya-related peacemaking efforts, which have been led primarily by the UN and heavily involved European nations.

"It's (the) UN itself which needs us now," Chergui said. "It's time to bring this situation to an end... the two organisations should work hand-in-hand for that goal," he added.

Libya has been torn by fighting between rival factions since a 2011 NATO-backed uprising killed dictator Moamer Kadhafi.

South African President Cyril Ramaphosa, who took over as AU chair on Sunday, has said Libya is one of two conflicts he wants to focus on during his tenure.

The other is South Sudan, where a civil war that began in 2013 has left hundreds of thousands dead -- but talks on the sidelines of the AU summit ended in deadlock.

The two-day summit ended in the early hours of Tuesday morning, with the traditional closing session and press conference cancelled. The decisions adopted were expected to be announced later Tuesday.

UN Secretary General Antonio Guterres on Saturday said he understood the AU's "frustration" at having "been put aside" when it comes to Libya.

The North African state remains in chaos, mostly split between strongman Khalifa Haftar, who controls eastern Libya, and the UN-recognised government in Tripoli.

Talks between Libya's warring factions ended on Saturday with no deal on a ceasefire. The UN has proposed a second round of negotiations for February 18.

Chergui said the AU could support peace if a cessation of hostilities agreement is finally signed, declaring the AU wanted to be part of an observer mission to ensure any deal is respected.

"This is an African problem, and we have a certain sense that maybe others do not have," Chergui said.

Despite AU optimism, analysts are sceptical.

Observers pointed out that the AU will need to overcome financial constraints and internal divisions if it wants to achieve its goal of "Silencing the Guns" -- the theme of summit talks.

"The AU bandwidth on Libya cannot in any way be compared to the UN's involvement, just in simple terms of knowledge and presence on the ground," said Claudia Gazzini, from the International Crisis Group think-tank.

Meanwhile, on South Sudan, leaders tried to bring longtime rivals together to reach a deal.

President Salva Kiir and rebel leader Riek Machar face a deadline of February 22 to form a unity government -- a milestone that was delayed twice last year.

Ramaphosa met separately with Kiir and Machar on Saturday, and the rivals sat down in the same room Sunday alongside Ugandan President Yoweri Museveni and Sudanese Prime Minister Abdallah Hamdok.

Hamdok is the current chair of the eight-member East African bloc IGAD, which has taken the lead in South Sudan peace negotiations.

But the flurry of activity on the sidelines of the AU summit did not result in a breakthrough in the dispute over the number of regional states in South Sudan -- a contentious issue as the borders will set out divisions of power and control in the young country.

IGAD said that despite the lack of progress to date there could be no more delays in forming a power-sharing government.