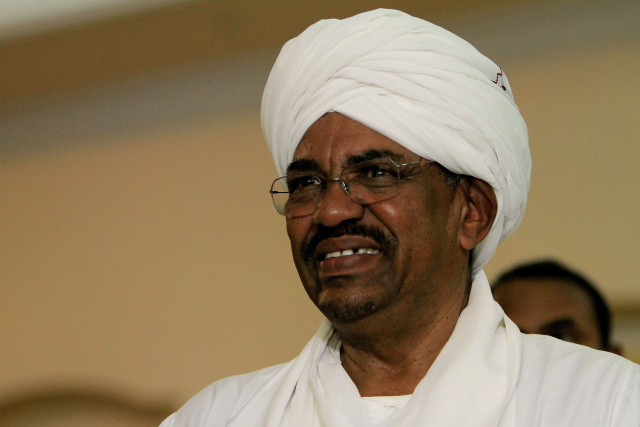 (FILES) In this file photo taken on May 7, 2011 then Sudanese President Omar al-Bashir looks on during a meeting in Khartoum with an Egyptian diplomatic delegation. Sudan has agreed to hand over ousted autocrat Omar al-Bashir and others to the International Criminal Court for alleged war crimes in Darfur, a top official of the new ruling body said on February 11, 2020. (Ashraf SHAZLY / AFP)

(AFP) - Rights groups pushed Wednesday for the swift handover of Sudan's ousted strongman Omar al-Bashir to the International Criminal Court after the country's new authorities pledged to bring him to justice for alleged war crimes in Darfur.

Top Sudanese officials said Tuesday that the new rulers had agreed with rebel groups to send Bashir and three former aides to The Hague-based court for their role in the conflict in the western Darfur region.

"Omar al-Bashir is wanted by the ICC over the murder, extermination, forcible transfer, torture and rape of hundreds of thousands of people during the conflict in Darfur.

"A decision to hand him over to the court would be a welcome step towards justice for victims and their families."

The conflict in Darfur, a region the size of France, erupted in 2003 when ethnic minority rebels took up arms against Bashir's then Arab-dominated government, accusing it of economic and political marginalisation.

The ICC has charged Bashir with genocide, war crimes and crimes against humanity for his role in the conflict.

Bashir, who is detained in Sudan after being convicted of corruption, denies the allegations. He evaded arrest for more than a decade, travelling overseas in open defiance of the ICC.

Bashir and the three others wanted by the ICC "have to go there," Mohamed Hassan Al-Taishay, a member of Sudan's new ruling sovereign council, said on Tuesday.

"We agreed that we fully supported the ICC and we agreed... that the four criminals have to be handed over," Taishay said in the South Sudanese capital Juba where a government delegation was meeting rebel groups from Darfur.

He did not specify when they would be transferred to The Hague.

Rights groups say widespread abuses have taken place in Darfur, where the United Nations says about 300,000 people have been killed and millions displaced since the conflict began.

"Sudanese security forces' widespread attacks on civilians under Bashir's campaign of terror, including pervasive sexual violence as a weapon of war, have had devastating impacts on the lives and livelihoods of their victims," US-based NGO Physicians for Human Rights said in a statement.

"It is beyond time that his victims and their families receive justice."

Taishay said that the Juba talks had focussed on several mechanisms for achieving peace in Darfur, including the establishment of a special court to investigate crimes in the region.

Sudanese government spokesman Faisal Mohamed Salih told reporters on Wednesday that "details of how Bashir and others will be presented in front of the ICC will be discussed with the ICC and armed groups".

The International Federation for Human Rights (FIDH) said the ICC faced a major responsibility ahead.

"The Court needs to get this right: it must re-engage with victims and affected communities and publicise its work effectively so that justice is visible to the people affected by the crimes," its president Alice Mogwe said in a statement.

Bashir was ousted by the army in a palace coup last April after months of protests against his three decades of iron-fisted rule.

He was arrested and later sentenced to two years in a detention centre on corruption charges.

Anti-Bashir protesters, residents of Darfur and rebel groups from the region have consistently demanded that he be handed over to the ICC.

Years of conflict in Darfur and other regions and the secession of South Sudan in 2011 left the country's economy in a shambles -- the key factor for nationwide protests against Bashir last year.

Long queues still form at bakeries, and rows of vehicles can be seen outside fuel stations across Khartoum.

"Every family is divided these days in a way," said Hassan Ahmed, a private sector employee waiting to fill his car at a fuel station.

"Some members are standing in a queue for bread, some for fuel and others for cooking gas. We are suffering a lot."