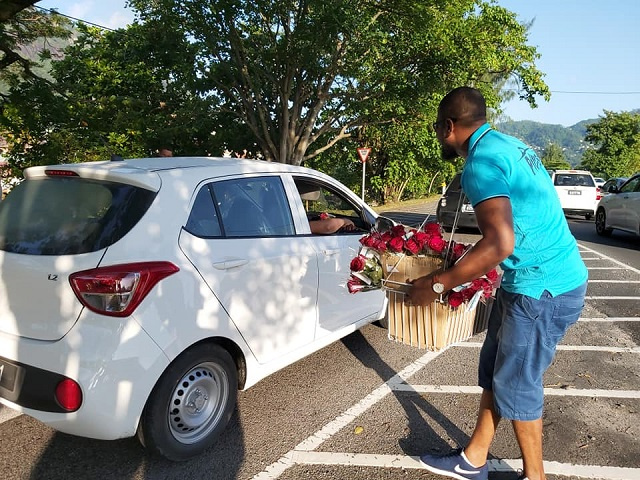 Workers together with the owners of Prowash were along the Bois De Rose Avenue on Friday morning handing over roses to women in the traffic. (Eddie and Anna Westergreen)

(Seychelles News Agency) - Love was definitely in the air and on the streets on Friday in Seychelles! A local company gifted roses to women in traffic on Valentine's Day to spread cheers and love.

Workers and owners of Prowash, Eddie and Anna Westergreen, were along the Bois De Rose Avenue on Friday morning handing over roses to women in the traffic.

Anna Westergreen, the director of Prowash, said, "It is a nice day and I think that everybody would be happy to get a flower on any day, but it just happened to be Valentine's Day."

She said that the company wanted to hand out roses on Valentine's Day and "we are here during the traffic every single day and it is like bumper to bumper at 8 o'clock so why not give all the ladies a rose?"

Valentine's Day which is celebrated annually on February 14 is recognised as a significant cultural, religious, and commercial celebration of romance and romantic love in many regions around the world.

Prowash also organised a raffle for the last two weeks, from February 1-14 where buyers could win a free steam cleaning, a free headliner cleaning, and a free wash and wax.

Eddie and Anna Westergreen were previously owners of a flower shop and know what it's like on Valentine's Day.

"We used to have a flower shop - Dorothy the Florist. Since my husband was 14 years old, he has been working in the flower shop with his mom. We gave the business which is still located at Riverside to one of our staff who worked with us for 23 years," said Anna.

She said this year is "the first Valentine's Day that we are not selling flowers so we decided to give flowers instead. That is how it came to be as we have been in the flower business longer than the carwash."

A total of 200 roses were given which Anna bought from her previous flower shop.

"We handed out the roses on the street and then saved roses for all the women who are coming to wash their car today. Just red roses because people want red roses. When we were in the flower business and ran out of red roses, we would offer pink, yellow or white, they would say that they need red. It is the colour of Valentine's Day," she said.

Receivers of the roses were pleasantly surprised, said Anna. "There were a few people who called and thanked us and there were others who took a photo of the rose and the business card and tagged us in it on Facebook. For the people who their windows were down, we made a couple of videos. The men wanted roses too!."

Prowash is a carwash business which started operation five years ago at Riverside on the outskirt of Victoria, the capital. It offers self-service and coin-operated services.  Another branch opened last year in Roche Caiman, central Mahe district.

She added that the company is "thankful for all our clients who have been very loyal and supportive since we opened our business."