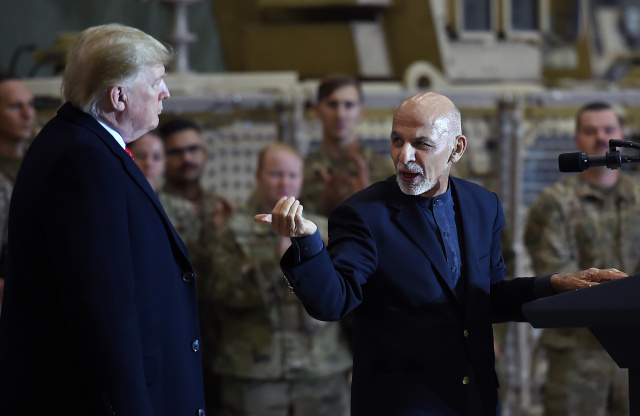 (FILES) In this file photo taken on November 28, 2019 Afghan's President Ashraf Ghani addresses US troops during a surprise Thanksgiving day visit of US President Donald Trump at Bagram Air Field,in Afghanistan. he United States has secured a seven-day reduction in violence in talks to help seek a negotiated settlement in Afghanistan, Pentagon chief Mark Esper said February 13, 2020. The announcement came as NATO defence ministers met in Brussels and a day after Afghan President Ashraf Ghani reported "notable progress" in negotiations with the Islamist insurgents."The United States and the Taliban have negotiated a proposal for a seven-day reduction in violence," Esper told reporters, dubbing his meetings with NATO colleagues "productive." (Olivier Douliery / AFP)

(AFP) - Afghan President Ashraf Ghani on Saturday voiced cautious optimism about a partial truce agreed between the Taliban and US and said that a further announcement was expected in the coming 10 days.

The agreement for a seven-day "reduction in violence" announced this week after long negotiations between Washington and the jihadists has raised hopes that a comprehensive peace deal could follow.

But it is still not clear when the period will begin and Ghani said that the Taliban's sincerity in entering the agreement was unproven.

But he added, "you're not going to find an answer to this question unless you engage in the peace process."

The acid test of the Taliban's sincerity will be their willingness to accept elections, Ghani said -- something they have always refused to engage in.

If the preliminary agreement holds, the hope is that direct talks between the Taliban and Kabul government could follow, with an eventual comprehensive peace deal the ultimate goal.

The US wants to reduce its military presence in Afghanistan, which currently numbers between 12,000 and 13,000, with President Donald Trump keen to make good on a promise to bring troops home after 18 years of war.

Ghani, whose administration has at times been frustrated at being shut out of talks between the US and Taliban, mostly conducted in Doha, insisted he was "on the same page" as Washington.

He said Afghanistan and the US would be making another announcement in the coming "week to 10 days" in order to "demonstrate mutual confidence and trust between us."

"You're not going to solve this issue on the basis of paper discussions," he said.

"You are going to have to take an existential step forward and test."

There have been previous false dawns in Afghanistan, with a deal all but complete in September before Trump nixed it at the last moment amid continued Taliban violence.

The Taliban, ousted from power in Kabul in a US-led invasion in 2001, has long demanded the complete withdrawal of US forces from Afghanistan.

But US and Afghan officials say a reduction will depend on the militants sticking to their side of the deal.

Ghani said his country was well prepared for an initial fall in US troop numbers to 8,600, pointing out that the vast majority of combat operations are now carried out by Afghan forces.

General » Be a reporter: Write and send your article » Subscribe for news alert
Tags: Afghanistan, US, Taliban