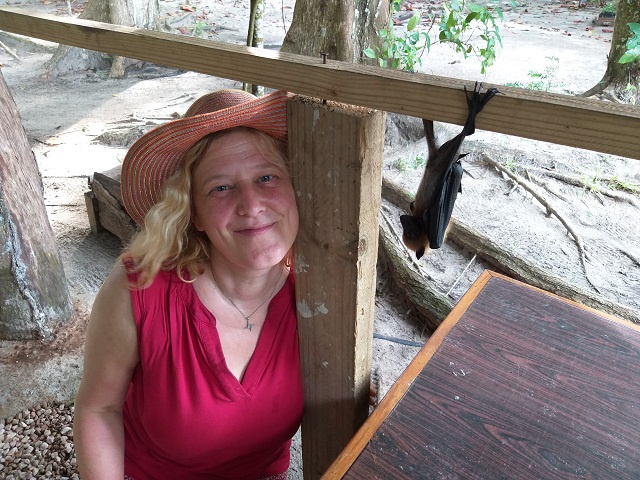 Daysie the baby fruit was rescued by a German tourist -- Auja Simone -- on a tour at the La Digue  Veuve Reserve. (Seychelles National Parks Authority)

(Seychelles News Agency) - A German tourist can add "fruit bat rescuer" to her CV after a visit to a reserve on Seychelles' third largest island, La Digue.

The rescue happened February 4 as Auja Simone toured Veuve Reserve with ranger Elsie Pierre when the two heard a noise in the bushes.

The tourist and ranger searched the area and found a baby fruit bat.

The two ladies brought the animal back to the reserve's information centre where Simone was asked to name the bat. As the nocturnal mammal was found during the day, Simone chose to call her Daysie.

The German visitor described the baby bat as "very sweet with the sweetest ears and eyes, and a nice voice."

After two weeks Daysie is still being fed on lactogen milk and enjoying ripe Indian almond nuts. She is described as active, strong and the centre of attention at the reserve. Tourists, the public and school children are visiting her and taking pictures with her.

The officer in charge of the Veuve Reserve, Josianna Rose, told SNA on Wednesday that Daysie will be taken care of until it gets better and stronger while the reserve works out what to do next at it is still a baby.

During the past three weeks, members of staff have rescued three baby fruit bats. The first one, a male bat named Kiwi, sadly passed away two days after the rescue. The second rescue was a success story, where staff managed to reunite a baby with its mother as it was dropped accidentally by her and she has been seen in the area calling to her young one.

Seychelles looking to increase use of national parks by visitors, residents