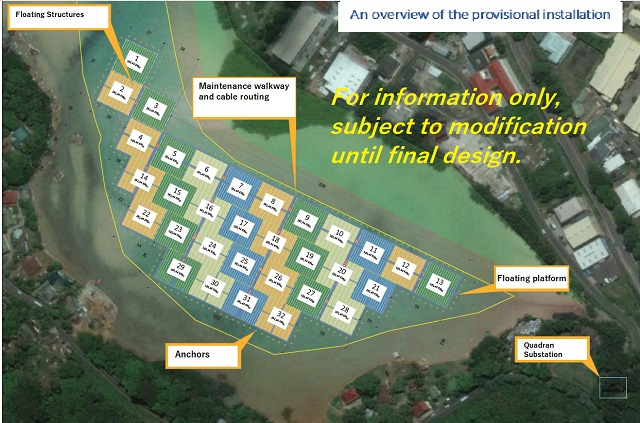 The four-megawatt power plant will be built in the lagoon at Cascade. (Roland de Rosnay, Quadran International --provisional picture)

(Seychelles News Agency) - All necessary measures will be taken to mitigate the impact on the environment during the construction of Seychelles' first utility-scale floating solar photovoltaic (PV) system, said a government official.

The chief executive of the Seychelles Energy Commission, Tony Imaduwa, gave the assurance during a consultative meeting on Saturday in the central Mahe district of Les Mamelles.

The public meeting was part of an Environmental Impact Assessment (EIA) carried out in the lagoon at Cascade on Mahe, the main island, where the four-megawatt power plant will be built.

One of the concerns raised by the public was the location of the plant and the impact the construction will have on the marshes' ecosystem.

"Of course we will be taking all their concerns into consideration and we will carry out an in-depth study of the marsh to see how this project can be implemented without causing damage to the environment," said Imaduwa.

He said the lagoon was chosen as it was sheltered from elements such as waves and wind.

Another concern which was addressed was access to the lagoon for boat users in the area.

Imaduwa said, "The project takes into account boat access considering some boats use this area. It will not be an issue as the plant will not obstruct boat access."

The Seychelles Energy Commission said the key agreements for the construction of the utility-scale floating solar photovoltaic (PV) are expected to be signed in May.

A notice of intended award was issued to Quadran Seychelles Ltd, in December -- one of six companies which submitted proposals for the project.

The locally set up branch of Quadran - an international renewable energy company operating in Africa, Europe, and Asia – will finance the entire cost of the project and the electricity produced will be sold to the Public Utilities Corporation.

Imaduwa explained that Quadran Seychelles limited was awarded the project because the rate at which it was proposing to sell the electricity it produces was more competitive at $9.50 cents per kilowatt-hours.

The energy from the new project is expected to equate to 1.6 percent of the energy target set for 2030 for Seychelles, an archipelago in the western Indian Ocean.

"Not only was their rate the lowest but their technical proposal for a 25-year power purchase agreement was also the best out of the projects submitted," he said.

There were also proposals to relocate the project to La Gogue dam and Imaduwa said it was the initial site.

"As you are aware the dam is presently under construction so we had to look for an alternative location. However, once the dam is completed we would consider having a PV system there because, with the scarcity of land, Seychelles should be having these systems on open waters," he said.

The Energy Commission says the power purchase and government support agreements are expected to be signed in May after which the construction of the power plant will start.

"Construction is expected to last six months and the project will hopefully be commissioned before the end of the year," said Imaduwa.

Seychelles' floating solar photovoltaic (PV) system will be the first in Africa.

Floating solar PV has been deployed at scale in markets including Asia and Europe, but these installations have been in freshwater sites such as lakes and reservoirs. No floating solar PV has yet to be implemented in a seawater environment at utility-scale.