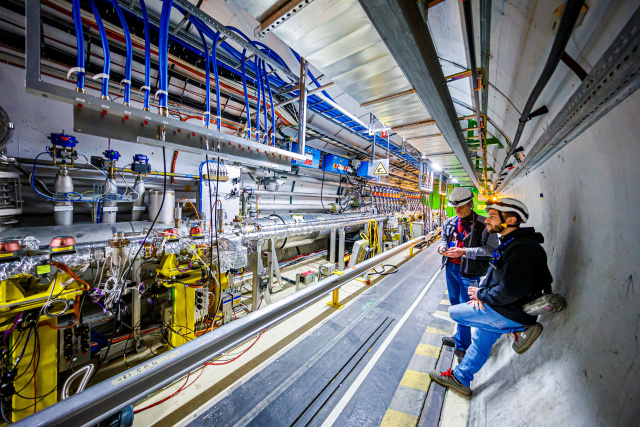 Workers wait by the beam lines in a tunnel of the Large Hadron Collider (LHC) at the European Organisation for Nuclear Research (CERN), during maintenance works on February 6, 2020 in Echenevex, France, near Geneva. Six years after the historic discovery of the Higgs boson, the world's largest particle accelerator is taking a break to boost its power, hoping to find new particles that would explain, among other things, dark matter, one of the great enigmas of the Universe. (VALENTIN FLAURAUD / AFP)

(AFP) - The United Arab Emirates said Monday it has issued a licence for a reactor at its Barakah nuclear power plant, the first in the Arab world, hailing a "historic moment".

The national nuclear regulator "has approved the issuance" of the operating licence for the first of four reactors at the plant, said Hamad al-Kaabi, the UAE representative to the International Atomic Energy Agency.

"This is a historic moment for the UAE, making it the first Arab country in the region to operate a nuclear power plant," Kaabi told a press conference.

"This milestone was achieved due to the UAE's vision and its leadership to build a peaceful nuclear energy programme to cater for the future needs of energy in the country."

The Barakah plant, located on the Gulf coast west of the UAE's capital, had been due to come online in late 2017 but faced a number of delays that officials attributed to safety and regulatory requirements.

Abu Dhabi authorities said in January that the plant would start operating within a few months.

"The full operation of Barakah plant in the near future will contribute to the UAE's efforts for development and sustainability," Kaabi said Monday, without giving a new date.

The plant is being built by a consortium led by the Korea Electric Power Corporation in a deal worth over $20 billion.

When fully operational, the four reactors have the capacity to generate 5,600 megawatts of electricity, around 25 percent of the nation's needs. The remaining three reactors are almost ready for operation.

The UAE has substantial energy reserves, but nuclear and renewables are targeted to contribute around 27 percent of its electricity needs by 2021.