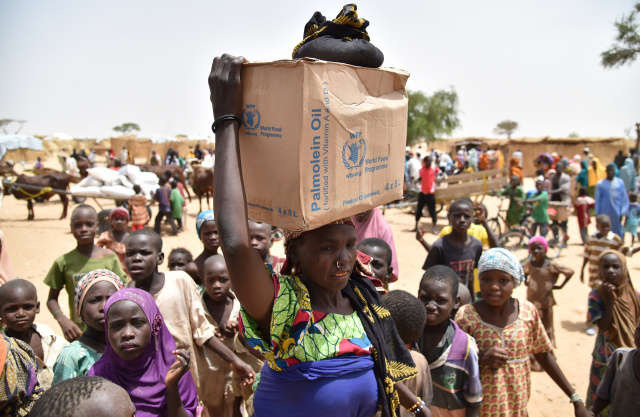 An internally displaced woman from Niger, who fled Boko Haram incursions, carries food supplies handed out during a food distribution at the Asanga refugee camp near Diffa on June 16, 2016. (ISSOUF SANOGO / AFP)

(AFP) - Fifteen women and five children were trampled to death on Monday in a stampede for food and money for refugees in southeast Niger, a regional governor said.

The accident occurred at a youth and culture centre in Diffa, the main town of a region of the same name that hosts more than a quarter of a million refugees and internally displaced people.

"Unfortunately, fifteen women and five children died... in this regrettable drama," Issa Lemine, the regional governor of Diffa, said on television after visiting the injured in hospital.

Aid workers confirmed the death toll and said about 10 people had been injured.

The region which abuts Nigeria and Chad has been repeatedly hit by attacks by Nigeria's Boko Haram jihadist group since 2015.

It hosts 119,000 Nigerian refugees, 109,000 internally-displaced people and 30,000 Nigeriens who have come home from Nigeria because of the instability in its northeast, according to UN figures released in October.

The aid being distributed had been given by Babagana Umara Zulum, the governor of Borno state in northeast Nigeria, a Nigerian official told AFP.

He had come to the region to visit camps for refugees and the displaced, and had already left the town when the stampede occurred.

A large amount of food, cooking oil and clothing, as well as money, was due to be distributed, a Diffa municipal worker told AFP.

"Thousands of people were in the courtyard of the MJC (Culture and Youth Centre) and nearby," he said.

"As soon as the first people received their rations, the compressed crowd started to get excited, the organisers were swiftly overwhelmed and then it all kicked off -- women, children and the fit ones started to push," the employee said.

"The weakest people fell to the ground. Some were injured and others were crushed to death."

"Thousands of people, most of them refugees, heard about the handout and left the camps, sometimes travelling up to 100 kilometres (60 miles) to get to Diffa," the source said.

A local official said he was astonished at the situation: "Normally, people who are entitled to the handouts send a representative to Diffa to pick it up. But this time, the refugees themselves decided to come and get it, travelling dozens of kilometres (miles)."

Another resident said: "Even ordinary inhabitants of Diffa rushed there in the hope of getting the handout."

A local journalist said the emergency services arrived swiftly, taking wounded people to local treatment centres, while bodies were taken to the morgue of the nearby Diffa hospital.

In addition to a crisis sparked by jihadist violence, Diffa is also battling floods caused by the Yobe River, which delineates part of Niger's border with Nigeria.

The floods have left more than 20,000 people without shelter, according to the local authorities.

They have also devastated rice and pepper fields, whose harvests provide the backbone of the local economy.