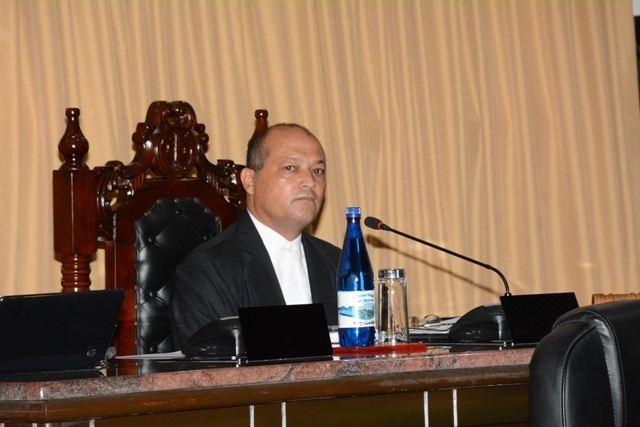 Prea was sworn in as the fourth speaker of the National Assembly in March 2018. (Louis Toussaint)

According to a press communique from the secretariat of the National Assembly on Tuesday, Prea wrote to the leader of SNP, Wavel Ramkalawan, and the Electoral Commission which he had to do as an office-bearer.

"My decision is purely administrative and I remain an ordinary member of the Seychelles National Party (SNP), a Party that I have always believed in its principle and ideology," Prea said in the communique.

He added that as SNP is part of the alliance of the Linyon Demokratik Seselwa (LDS), "I am thus still a member of LDS and also remain the LDS elected MNA for the district of Bel Ombre." An MNA refers to a Member of the National Assembly.

"I wish to thank Prea for his contribution over many years to the work of the SNP. I express this on behalf of other officials of the Party and of our members," Ramkalawan told a press conference on Tuesday.

The Seychelles National Party was formed in 1994, one year after the return of multiparty democracy in 1993 in the island nation with a population of 95,000.

The leader of the SNP said that this development does not in any way affect Linyon Demokratik Seselwa (LDS), the opposition collation in the National Assembly.

Prea was sworn in as the fourth speaker of the National Assembly in March 2018 after the resignation of Patrick Pillay, who assumed the post after the legislative elections in September 2016 in January of the same year.

The LDS coalition which is made up of SNP, Lalyans Seselwa, the Seychelles Party for Social Justice and Democracy and the Seychelles United Party, came to together to contest the National Assembly elections of 2016.

LDS won for the first time the majority of seats in the National Assembly -- 19 out of the 33 -- putting Seychelles, an archipelago in the western Indian Ocean, in a position of cohabitation.

The resignation of Prea comes during a presidential election year. Elections for the President of Seychelles will be held in the last part of 2020; no date has yet been set.

According to the Electoral Commission, there are presently 12 political parties registered in Seychelles, a group of 115 islands in the western Indian Ocean. Only two parties have so far made known their intentions to take part in the presidential election.