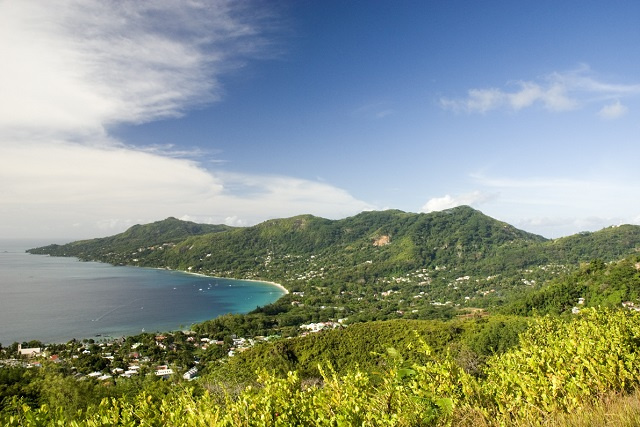 This project is crucial as there is a connectivity between mountains, rivers and the coast. (Gerard Larose, Seychelles Tourism Board)

(Seychelles News Agency) - A first-of-its-kind project in Seychelles will show an integrated approach to the management of marine, coastal and terrestrial ecosystems of the island nation, stretching from mountaintop to coastline.

The $31 million project, from Ridge to Reef, will be implemented over six years. It is co-financed by Seychelles' government, the United Nations Development Programme (UNDP) and civil societies.

The official signing of the project document was held Wednesday at the Foreign Affairs headquarters between the UNDP Resident Representative Amanda Serumaga and Alain Decomarmond, the Principal Secretary for Environment from the Ministry of Environment, Energy and Climate Change.

"First of all it's going to focus on enhancing the management and conservation of not just agricultural ecosystems and the upland forest but also as well coastal and marine ecosystem," said Serumaga.

The UNDP representative further explained that "the idea about the Ridge to Reef project is that we need to have sustainable management of our ecosystems and biodiversity in order to guarantee some of the livelihoods that people wish to live within Seychelles."

The project objective is to undertake a comprehensive Ridge to Reef approach addressing the 'whole island' priorities of improved management and conservation.

It is also designed to reduce threats to globally significant biodiversity by strengthening the country's system of marine protected areas and reducing negative land-based impacts on those ecosystems.

Reverse land degradation in areas outside of formally protected areas leading to positive impacts and strengthen capacity and partnerships to promote the R2R approach.

"The project will have a very strong community outreach component to it, educating the general public, the different groups in society. There will be the involvement of associations and of young people. There are resources in the project to ensure that there is enough educational awareness for all groups," explained Decomarmond.

The Principal Secretary highlighted that a lot of emphasis will be on key biodiversity areas in the mountains not yet demarked as protected areas.

These areas where the project will focus will be on Mahe and Praslin – the main and second most populated islands -- and on Curieuse island -- a terrestrial and marine park of Seychelles.

TRASS -- a not for profit organisation based on Praslin -- will be implementing the project on the island. Elvina Henriette, biodiversity consultant working with TRASS said that the main activity will be the replanting of trees and other plants in mountainous areas.

"This project is crucial as there is a connectivity between mountains, rivers and the coast. All that happens at the top has a direct impact on what happens at the bottom. You cannot have a programme that looks only at one side but we must consider a landscape approach so that whatever is done at the mountains will have a positive impact on the reef," Henriette told SNA.

On the coast, the project aims to create specially protected areas for turtles to lay their eggs during the breeding season.