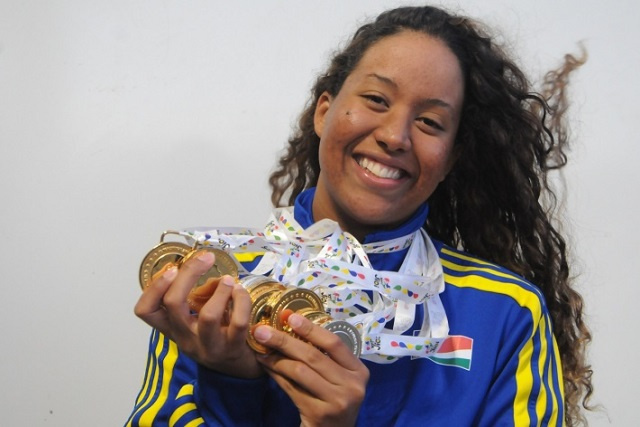 Passon is locally dubbed the 'Golden Girl' for her outstanding performance at the 10th Indian Ocean Island Games. (Seychelles Nation)

(Seychelles News Agency) - Seychellois swimmer Felicity Passon has qualified for the 2020 Olympic Games in Tokyo, Japan after her performance at the Grand Prix swim meet in Durban, South Africa.

Passon became the second Seychellois athlete to qualify for the Games after she finished first in her heat for the 200m backstroke in 2 minutes 13.94 seconds. The Olympic selection time, also known as B time, is 2 minutes 14.30 seconds.

The Olympics are being held in Japan in July and August.

Speaking to SNA via WhatsApp on Saturday, Passon said, “I’m really happy, this means so much to me, it’s been my goal for a long time.”

Passon is the second Seychellois athlete to qualify after sailor Rodney Govinden booked a place in the Games for the second time after winning a gold medal in the African Laser Championship in Algeria, last year.

The Seychellois athlete who is now the first female swimmer from Seychelles, an archipelago in the western Indian Ocean, to qualify for the Olympic Games, also set a new national record. Passon erased her own record set at the All Africa Games in Morocco in August last year.

Passon finished first in both her events — the 50m and 200m backstroke — at the two-day competition in Durban and will be swimming in the finals on Saturday. She will also compete in the 100m backstroke.

Passon locally dubbed the 'Golden Girl' for her outstanding performance at the 10th Indian Ocean Island Games is the best sportswoman for 2019. She is currently training with TUKS Aquatics Club in Pretoria under coach Rocco Meiring until April 2020.

Her main focus now is getting the ‘A’ time which is the Olympic Qualifying time.

“But of course there’s still work to do. My goal is to keep getting faster and lowering my times,” said Passon.

She will be taking part in the South Africa Nationals -- Olympic Trial -- from April 4-9 in Durban and complete her qualifying sessions in June 2020 in Europe at the Mare Nostrum.