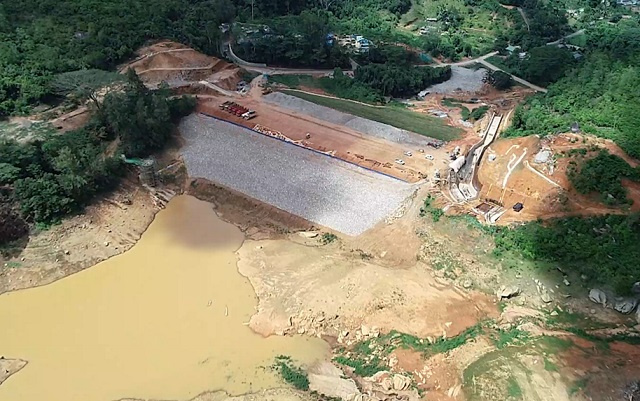 The Public Utilities Corporation (PUC) says that 70 percent of the work needed to raise Seychelles’ main reservoir by 6 metres is complete.
The La Gogue dam -- whose storage will increase by 600,000 cubic metres to 1.6 million cubic metres -- is expected to be operational at the end of June, six months behind schedule.
“We had completed the embankment filling up to the existing dam crest and we are currently increasing the height of the embankment by the additional 6 metres. A total of 10 layers have been completed upstream which is a height of approximately 3 metres,” explained Erna Victor, the officer responsible for the project at the PUC.
Victor said that the replacement of all the pipes, valves and fittings in the intake tower and tunnel have been completed. In order to increase the intake tower height by an additional 6 metres, the concrete top has been demolished and the existing footbridge has been removed.
The contractor has also begun installing reinforcements and formwork for concrete casting. The oil filling and compaction work in preparation for the construction of the permanent road around the dam are well underway.
Adverse weather conditions with heavy rainfall coupled with a series of protests by local truck owners caused major delays for the project. The Seychellois truckers were protesting as they felt they were not being involved in the works.
“As this is a PUC project, the contractor was encouraged to engage the services of local providers. In support of this recommendation, Sinohydro has employed the services of a local subcontractor as well as several other local service providers to carry out works related to the project,” explained Victor.
Once the dam becomes operational, work will shift to the second component of the project which is the construction of a new water treatment plant. The plant will have the capacity to treat 4,400 cubic metres of water per day. The La Gogue plant is expected to be completed in June 2021. It will be the fourth treatment plant after Hermitage, Le Niole and Cascade distributing potable water to Mahe – the main island of the 115 islands archipelago in the western Indian Ocean.
Renovation works of the La Gogue dam and the construction of the new treatment facility are being undertaken Chinese contractor - Sinohydro - cost $13.6 million funded by the African Development Bank and Seychelles’ government.
General » Be a reporter: Write and send your article » Subscribe for news alert
Tags: La Gogue plant, Public Utilities Corporation, La Gogue dam