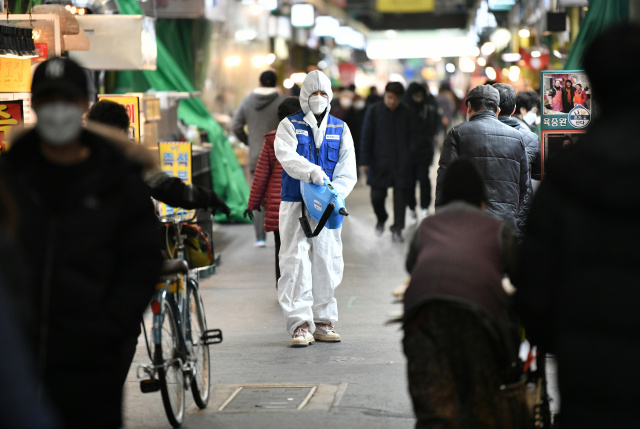 A worker from the Korea Pest Control Association, wearing protective gear, sprays disinfectant to help prevent the spread of the COVID-19 novel coronavirus at a market in Seoul on February 24, 2020. South Korea reported 161 more coronavirus cases on February 24, taking the nationwide total to 763 and making it the world's largest total outside China. (Jung Yeon-je / AFP)

The country has seen a rapid surge in the number of coronavirus cases -- adding more than 700 cases in less than a week -- since a cluster of infections emerged from a religious sect in the southern city of Daegu.

Most of the country's cases are connected to the Shincheonji Church of Jesus in the southern city of Daegu, including 129 of Monday's confirmations, the Korea Centers for Disease Control and Prevention said in a statement.

Two more people had died, it added -- both of them connected to a second cluster around a hospital in Cheongdo -- taking the toll to seven.

South Korean President Moon Jae-in on Sunday raised the country's virus alert to the highest "red" level, in a bid to strengthen the government response to the spiralling outbreak.

The government has extended kindergarten and school holidays by one week nationwide and plans to enforce tighter two-week monitoring of arrivals from China.

The outbreak has forced South Korean tech giant Samsung Electronics to suspend operations at its smartphone plant in Gumi, 200 kilometres (125 miles) southeast of Seoul, after one of its employees was infected at the weekend.

The Shincheonji cluster began with a 61-year-old woman who developed a fever on February 10 and attended at least four services in Daegu -- South Korea's fourth-biggest city, with a population of 2.5 million -- before being diagnosed.

Authorities say some 9,300 Shincheonji members in Daegu have either been quarantined or have been asked to stay at home, but hundreds have still yet to be reached.

Shincheonji, often accused of being a cult, claims its founder has donned the mantle of Jesus Christ and will take 144,000 people with him to heaven on judgement day.

But with more church members than available places in heaven, they are said to have to compete for slots and pursue converts.

In a video statement read out by its spokesman on Sunday, Shincheonji apologised for "causing concern", but insisted it was cooperating with health authorities for the "early cessation" of the situation.

The spokesman rejected public criticism blaming his church over the spike in the number of infections, noting the virus had broken out in China.

"Please be aware that the Shincheonji Church of Jesus and its members are the biggest victims of the COVID-19," he said.