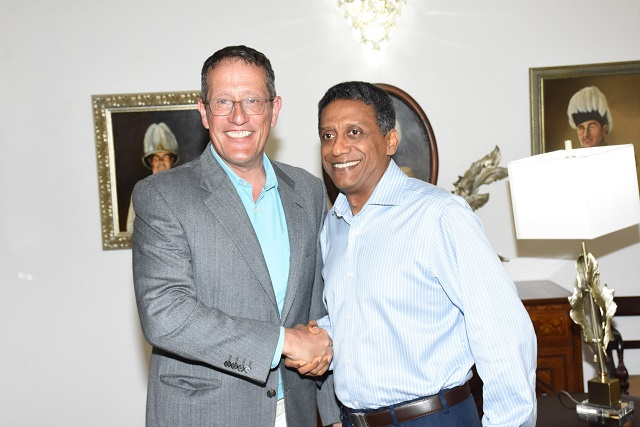 Richard Quest, who is in Seychelles filming segments for 'Quest's World of Wonder' and 'Quest Means Business,' met with President Dany Faure at State House on Monday. (Seychelles Nation)

(Seychelles News Agency) - One of CNN's international business correspondents discussed with Seychelles' President the issue of the island nation being blacklisted by France, a situation the journalist described as difficult.

Richard Quest, who is in Seychelles filming segments for 'Quest's World of Wonder' and 'Quest Means Business,' met with President Dany Faure at State House on Monday.

"I was listening to the president basically telling me that the country will do what is necessary to deal with this, but here is the problem. If Seychelles does what is necessary, essentially you will be destroying the so called off-shore banking industry," Quest told reporters.

"If people use off-shore for the purposes of hiding money, hiding ownership and tax evasion, and I understand that Seychelles now says that it will not be part of it, but that was the reason people had those accounts in the first place. So, I can see the difficulty that the country has at the moment," he said.

Before meeting President Faure, Quest had an interview with the Minister of Finance, Maurice Loustau-Lalanne, which will be air at midnight local time on Tuesday on CNN in 'Quest Means Business'.

Quest sees Seychelles as a leader in Africa when it comes to equality.

"It is not a secret that I am gay and I talked about the fact that Seychelles has decriminalised the law and I encouraged the president to continue with that movement towards equality. I think that as a country in Africa, this is a perfect opportunity for this country to lead the way, where other countries in Africa are going in the opposite direction. It is enough to say that Faure was not in disagreement," he added.

On a search to find out what the DNA of Seychelles is made of through his programme 'Quest's World of Wonder', the CNN business journalist met with locals and other high officials including the Minister for Tourism and chief executive of the Seychelles Tourism Board.

"I think people look at Seychelles as this exotic destination that people go to either for a honeymoon or wedding or as once in a lifetime bucket list. Now, this is different from the Caribbean, where you can travel for cheap prices," said Quest.

He added that because of the United States' influence, the Caribbean is a very well-travelled route and very sophisticated in terms of tourism management.

"But then you turn to Seychelles, which is a long way from anywhere. Therefore, your capacity of numbers is limited. I know people talk about the repeat business that you get, but it is still a very expensive holiday," he said.

Through 'Quest's World of Wonder,' he met with La Buse treasure hunters and visited the world's heaviest land tortoise living in the wild, Esmeralda, on Bird Island. Quest also learned more about the sustainable and eco-friendly aspects of the islands inclusive of the coral restoration program and additional weddings in Seychelles.

The Seychelles archipelago in the western Indian Ocean will be on 'Quest's World of Wonder' on CNN in April. The date is yet to be announced.