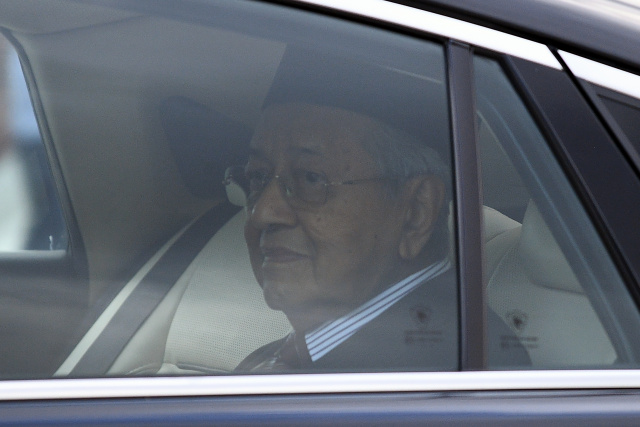 Malaysia’s former prime minister Mahathir Mohamad looks on as he leaves the National Palace in Kuala Lumpur on February 24, 2020. Mahathir resigned February 24 in a move analysts said appeared to be an effort to form a new coalition and block the succession of leader-in-waiting Anwar Ibrahim. (Mohd RASFAN / AFP)

(AFP) - Malaysian Prime Minister Mahathir Mohamad resigned Monday in a shock move as his alliance that came to power less than two years ago unravelled, but he was reappointed as interim leader by the king.

It came after months of rising tensions in his "Pact of Hope" coalition, which toppled a corruption-mired government in 2018, and as some manoeuvre to block the ascent of leader-in-waiting Anwar Ibrahim.

But there were calls for Mahathir, the world's oldest leader at 94, to stay in office from allies who said he had quit in protest at a plot to form a new government and keep Anwar from power.

The political drama began on Sunday when Anwar's rivals from the ruling coalition and opposition politicians held a series of meetings around Kuala Lumpur, stoking speculation a new alliance was taking shape.

That coalition would reportedly have excluded Anwar, a former opposition icon who was jailed for years on sodomy charges, dashing his hopes of finally becoming premier.

With the fate of the government still uncertain Monday, Mahathir submitted his resignation to the king. The monarch accepted it, but appointed him interim leader until a new premier is found, the chief secretary to the government said.

The appointment of all ministers was also revoked, he added.

Despite speculation that Mahathir was driving the attempts to form a new coalition, Anwar and other coalition partners insisted he was not involved.

Anwar -- who has a famously stormy relationship with Mahathir -- said the premier assured him "he played no part" in the plot, and was "very clear that in no way will he ever work with those associated with the past regime".

The proposed new coalition was reportedly set to include the United Malays National Organisation (UMNO) -- the party of disgraced ex-leader Najib Razak which was ejected from office two years ago.

Anwar and Mahathir had put their differences aside and joined forces to take on a corruption-plagued coalition led by UMNO at the 2018 polls. Mahathir, who previously served as premier from 1981 to 2003, had made a pre-election pledge to hand power to Anwar but refused to fix a date.

Lim Guan Eng -- a senior member of the Democratic Action Party, which formed part of the "Pact of Hope" alliance -- said Mahathir resigned in protest at the "nefarious attempt" to topple the government.

"Mahathir clearly stated that he cannot work with UMNO when we worked so hard to reject UMNO successfully in the 2018 general elections," he said, adding his party would nominate Mahathir to continue as prime minister.

As political tensions surged, Mahathir's Bersatu party quit the ruling coalition and several lawmakers resigned from Anwar's party, leaving the Pact of Hope in tatters and fuelling suggestions efforts could be underway to form a rival alliance.

Ibrahim Suffian, who heads independent polling firm Merdeka Centre, said Mahathir could come back as premier and the crisis may ultimately work in his favour.

"It gives him an opportunity to reshape the ruling coalition," he told AFP.

The final outcome of the drama is far from clear, however, with analysts saying a snap election could be called.

Anwar had teamed up with former nemesis Mahathir to oust the government of Najib, who had become embroiled in the massive 1MDB graft scandal.

The pair's difficult relationship has dominated Malaysia's political landscape for over two decades.

Anwar was sacked from government in the 1990s by Mahathir and then convicted of corruption and sodomy, in what his critics said was a politically motivated case, and they only reconciled before the election two years ago.

The Pact of Hope had always seemed an uneasy alliance and their popularity had been falling, as they were accused by critics of failing to look after the country's ethnic Malay Muslim majority and push forward reforms.

Race and protection of Malay rights are highly sensitive in Malaysia, which is about 60 percent Muslim but also home to substantial ethnic Chinese and Indian minorities.

General » Be a reporter: Write and send your article » Subscribe for news alert
Tags: Malaysia, politics