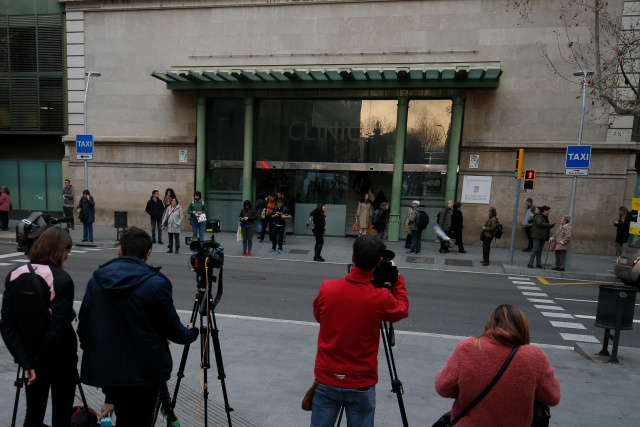 Journalists wait outside the Hospital Clinic in Barcelona on February 25, 2020 where a woman was hospitalised in a suspected case of coronavirus. A woman tested positive for coronavirus and her results will undergo a second analysis as required by Spain's protocol for suspected cases of the disease. (Pau Barrena / AFP)

(AFP) - Spain tried Wednesday to prevent the spread of the coronavirus from Italy after eight cases of the flu-like disease were detected within a 24-hour period all linked to the country.

Hundreds of tourists remained confined to a Tenerife hotel Wednesday for a second straight day as a precaution after a an Italian and his wife tested positive for the disease which has so far killed 11 people in Italy. The couple are in quarantine at a Tenerife hospital.

Two other Italians who were part of the same group of holidaymakers who flew to the island and were staying at the hotel have also tested positive, health authorities on the Canary Islands said.

Four other cases have been detected in mainland Spain -- two in the Madrid region, one in the Valencia region and one in Barcelona, that of a 36-year-old Italian woman who lives in the city and had recently made a trip to the north of Italy, the worst affected region.

All eight cases must be confirmed by a second test as required by Spain's protocol for suspected cases of the disease.

Spain's Health Minister Salvador Illa late on Tuesday advised people not to travel to northern Italy and other global hotspots for the disease such as Wuhan in China, South Korea, Japan and Iran "unless it is essential".

He also said all patients in Spanish hospitals with respiratory illnesses of "unknown causes" would undergo tests to see if they had coronavirus.

Spain is home to over 240,000 Italians and it welcomed 4.5 million visitors from Italy last year.

Spain had so far registered two confirmed cases of coronavirus, both in foreigners.

General » Be a reporter: Write and send your article » Subscribe for news alert
Tags: Spain, Italy