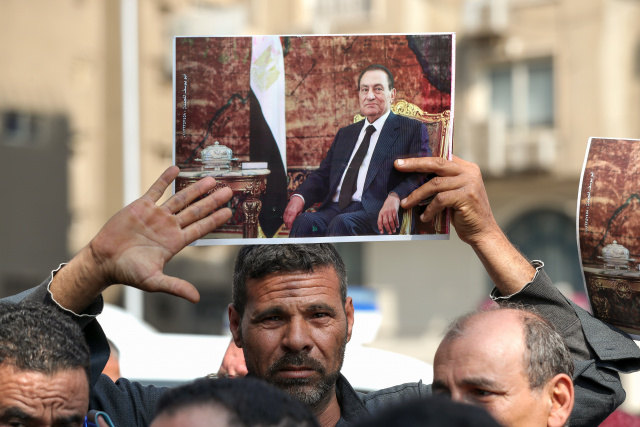 A supporter of Egypt's former president Hosni Mubarak holds a picture of the late leader near the family cemetary where he will be buried, in the Heliopolis neighbourhood in the capital Cairo, on February 26, 2020. Mubarak will be buried in a trendy Cairo suburb after a military funeral organised by the state to honour his war-time heroics. Mubarak, who died on February 25 aged 91 in a Cairo military hospital, crafted a lasting image of an autocrat in the region. (Khaled DESOUKI / AFP)

The presidential office declared three days of mourning for the veteran head of state dubbed a modern-day "pharaoh", who died aged 91 in a Cairo military hospital Tuesday after years spent in relative seclusion.

Mubarak's mixed legacy is that of an autocrat who ran a police state, employed emergency powers and rigged elections, and of a guarantor of stability who battled Islamist militants and kept close ties with Western powers.

The funeral focused not on Mubarak's political legacy but on the military career of the Soviet-trained fighter pilot who commanded Egypt's air force during the 1973 war with Israel.

A military helicopter delivered Mubarak's coffin, which was draped in an Egyptian flag and then mounted on horse-drawn carriage at Cairo's Mosheer Tantawi mosque.

Officers carried Mubarak's war medals and cannons fired a 21-shot salute before the coffin was later lowered into the ground in the family cemetery in Heliopolis in east Cairo.

Sisi, who did not address the ceremony, shook hands with Mubarak's mournful sons Alaa and Gamal, who were recently cleared of corruption charges.

Dozens of Mubarak supporters came to mourn, among them Tharwat Hassan, 59, an office manager from Menufiyah, the governorate Mubarak hailed from.

"He lived to see the day his sons were cleared," Hassan said. He then pointed to torrential rains that drenched Cairo early this week, saying it was "as if the skies were crying for him".

"Hosni Mubarak was not just a statesman, he was the true embodiment of the state."

"Mubarak in God's hands," read the front-page headline of state newspaper Al Ahram, with a black stripe cutting across a photograph of the veteran ruler.

The former air force chief and vice president became head of state in 1981 after Islamist militants assassinated his predecessor Anwar Sadat during a military parade.

Mubarak, who was sitting next to him, was wounded. He would survive several more attempts on his life, including in 1995 when militants sprayed his motorcade with bullets at a roadblock in Ethiopia.

As Mubarak went on to lead the North African country, he relied heavily on the armed forces and security services to ensure stability and security, while promoting close ties with the United States and keeping Egypt's peace with Israel.

The mass protests that eventually brought down Mubarak were an explosion of popular anger against his police state and the corruption and nepotism that to many marked his rule.

Mubarak then spent years in detention for his role in the deaths of hundreds of protesters but was freed in 2017 after the convictions were overturned.

In the post-Mubarak years, Egypt was torn by political turmoil -- bloody unrest in the streets, the short-lived rule of Islamist president Mohamed Morsi, and his 2013 ouster by Sisi, another military man, who reimposed strict police powers.

Morsi died last year after a heart attack and was buried quietly at night with no fanfare, as Egyptian media derided his single year in office.

Mohamed Amin, a columnist for the biggest privately owned daily, Al Masry Youm, wrote that "you can agree or disagree with the departed president, but one thing is for sure: Mubarak never betrayed his country".

He compared Mubarak's fate with those of other autocratic Arab rulers in Libya, Yemen, Iraq and Tunisia, writing that "his end was unlike Kadhafi, Ali Abdullah Saleh or Saddam Hussein. He didn't seek asylum like Ben Ali.

"He said he would live here and die here. He pushed on with his dignity and his arrogance."