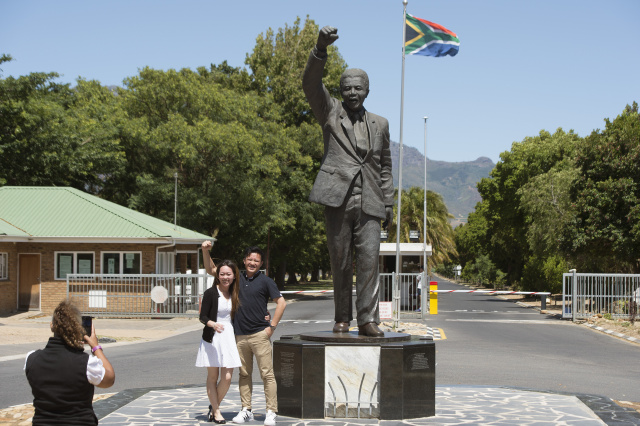 Tourists take photos outside Drakenstein Prison, then called Victor Verster Prison, where Nelson Mandela served the last 14 months of his 27 year imprisonment, in Paarl on January 23, 2020. A statue of Nelson Mandela, an anti-apartheid revolutionary and the former president of south Africa, depicting him walking to freedom with a South African national flag in the background, stands in front of the entrance of the Drakenstein Prison, previously called Victor Verster Prison.
Nelson Mandela spent the last 14 months of his 27 year imprisonment in a house at the Victor Verster prison and was released from on February 11, 1990, and went on to win the Nobel Peace prize and become the first President of democratic South Africa. (RODGER BOSCH / AFP)

(AFP) - The African Union chief on Thursday highlighted "differences" over topics like international justice and gay rights at a meeting with the European Union intended to deepen the partnership between their continents.

"Certainly, we have our differences. International criminal justice, sexual orientation and identity, the death penalty, the centrality of the African Union in certain crises, etcetera," Moussa Faki Mahamat, chair of the African Union Commission, said at a press conference kicking off a meeting between AU and EU leaders.

Calling these differences "normal", Faki said they could be overcome only with "recognition and acceptance".

In December she chose to visit the AU on her first trip outside Europe after taking her post, a decision she said at the time was intended to send a "strong political message" about Europe's partnership with Africa.

Von der Leyen is in the process of preparing a new "Africa Strategy" for the EU, due to be unveiled in early March.

In her own remarks Thursday, she said the two continents were "natural partners" and stressed areas of cooperation like trade and the fight against climate change.

Later at a press conference she said she believed the two blocs could work through the disagreements Faki had pointed out.

"This is what the essence of a good partnership and a good friendship is. You build on a solid foundation with common projects you can work on, and you're able to mark very clearly where differences are," she said. "We try to convince but we acknowledge that there are different positions."

"We should not follow the notion of expecting the African Union to adapt to the European Union," she added.

Various African countries have resisted efforts to try African leaders at the International Criminal Court in The Hague. In 2017, Burundi became the first country to pull out of the court altogether.

Europe will try to use Thursday's talks to promote trade and economic cooperation in response to "the flood of Chinese investment in the continent", said Mikaela Gavas, senior policy fellow at the Center for Global Development, an international non-profit foundation.

But the question of human rights remains a major potential barrier to deeper cooperation, Gavas said.

"African countries will not want to be lectured on governance and human rights," she said.