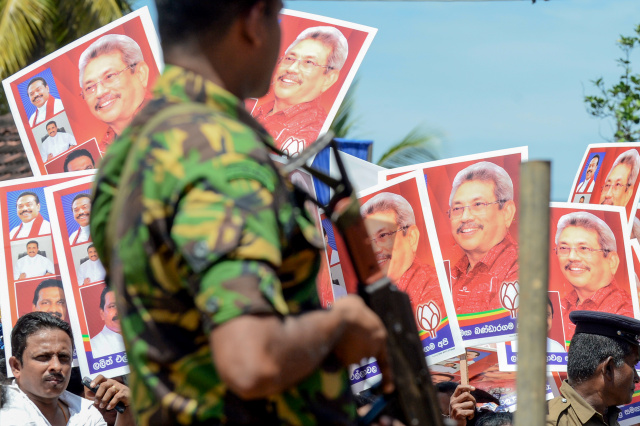 A Special Task Force (STF) soldier stands guard as supporters of Sri Lanka Podujana Peramuna (SLPP) and of former secretary to the Ministry of Defence and presidential candidate Gotabhaya Rajapaksa gather, during a presidential election campaign rally in Bandaragama on the outskirts of Colombo on November 3, 2019. Sri Lanka's election commission chief on November 3 backed down from plans to censor a state-owned TV station following criticism that his actions were supporting the main opposition candidate at this month's presidential polls.  (LAKRUWAN WANNIARACHCHI / AFP)

Gotabaya Rajapaksa is expected to exercise his constitutional power to sack the assembly when it completes four-and-a-half out of its five-year term on Sunday night, the Sunday Observer said.

Rajapaksa, 70, won a landslide at November presidential polls and appointed his older brother and former president Mahinda as prime minister in a move that saw the family consolidate their hold on power.

"The Gazette Extraordinary will be issued announcing the dissolution of the present parliament at the end of the completion of four-and-a-half years in terms of the provisions of the 19th Amendment to the Constitution," the Observer said quoting its sources at Rajapaksa's office.

Official sources told AFP that a general election was most likely in the final week of April if the 225-member national assembly is dissolved by Monday as widely expected.

Mahinda, who had been president twice and prime minister thrice, is expected to lead the Sri Lanka Podujana Peramuna (SLPP, or People's Front) party to a comfortable victory.

Political commentators have said it would be a formidable challenge for the opposition to prevent Rajapaksa securing a two-thirds majority which will allow him sweeping powers to govern the nation of 21 million people.

The United National Party (UNP) of former prime minister Ranil Wickremesinghe has been plagued by a debilitating internal power struggle.

The Rajapaksas are adored by the Sinhala-Buddhist majority -- but loathed among minority Tamils -- for spearheading the defeat of separatist militants in 2009 to end the island's 37-year ethnic war.

Prime Minister Rajapaksa announced last month that the country was withdrawing from a UN resolution investigating alleged war crimes in 2009, a move that was seen as boosting his popularity with the Sinhalese majority.

Mahinda was president when Sri Lankan troops defeated Tamil Tiger guerrillas in 2009, but rights groups accused the army of killing at least 40,000 Tamil civilians in the final months of the conflict, a charge Colombo has denied.