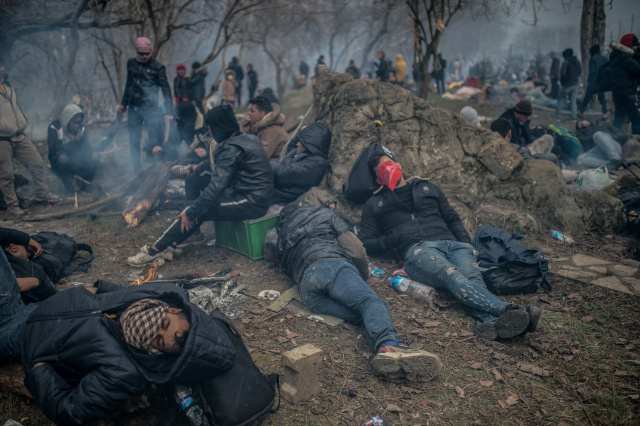 Migrants wait near the buffer zone at Turkey-Greece border, at Pazarkule, in Edirne district, on February 29, 2020. Thousands of migrants stuck on the Turkey-Greece border clashed with Greek police on February 29, 2020, according to an AFP photographer at the scene. Greek police fired tear gas at migrants who have amassed at a border crossing in the western Turkish province of Edirne, some of whom responded by hurling stones at the officers. The clashes come as Greece bolsters its border after Ankara said it would no longer prevent refugees from crossing into Europe following the death of 33 Turkish troops in northern Syria. (BULENT KILIC / AFP)

(AFP) - Turkey's President Recep Tayyip Erdogan on Saturday threatened to let thousands of refugees cross into Europe and warned Damascus would "pay a price" after dozens of Turkish troops were killed inside Syria.

Around 13,000 migrants have gathered along the Turkish-Greek border, the International Organization for Migration (IOM) said as several thousand migrants were in skirmishes with Greek police firing tear gas across the frontier.

The escalating tensions between Turkey and Russia, who back opposing forces in the Syria conflict, after an air strike killed the Turkish troops sparked fears of a broader war and a new migration crisis for Europe.

Erdogan said he would let refugees travel to Europe from NATO-member Turkey.

"What did we do yesterday? We opened the doors," Erdogan said in Istanbul.

"We will not close those doors.... Why? Because the European Union should keep its promises."

He was referring to a 2016 deal with the European Union to stop refugee flows in exchange for billions of euros in aid.

Erdogan's comments were his first since 34 Turkish troops were killed since Thursday in northern Syria's Idlib region, where Moscow-backed Syrian regime forces are battling to retake the last rebel enclave.

But the IOM said its staff had observed "at least 13,000 people gathered along the 212-kilometre (130-mile) long border.

"Thousands of migrants, including families with young children, are passing a cold night along the border between Turkey and Greece," it said.

There were skirmishes on the Turkish-Greek border at Pazarkule Saturday, as Greek police fired tear gas to push back thousands of migrants who hurled rocks at them, according to an AFP photographer at the scene.

In 2015, Greece became the main EU entry point for one million migrants, most of them refugees fleeing the Syrian civil war.

EU Commission chief Ursula von der Leyen expressed "concern" on the unimpeded flow of migrants from Turkey to the bloc's external borders in Greece and Bulgaria.

"Our top priority at this stage is to ensure that Greece and Bulgaria have our full support," she tweeted.

"We averted more than 4,000 attempts of illegal entrance to our land borders," government spokesman Stelios Petsas said after the meeting.

The Greek coast guard said that from early Friday to early Saturday 180 migrants reached the islands of Lesbos and Samos, crossing the eastern Aegean from the Turkish coast.

One rubber dinghy arrived early Saturday in Lesbos carrying 27 African migrants, many of them women, who wept and prayed on their knees, said an AFP reporter.

The UN says nearly a million people -- half of them children -- have been displaced by the fighting in northwest Syria since December, forced to flee in the bitter cold.

Syria's state media denied the attack and the existence of such a facility.

Turkish drone strikes killed 26 Syrian soldiers on Saturday, an independent war monitor said, after Erdogan threatened the regime would "pay a price" for its aggression.

The Britain-based Observatory for Human Rights said the strikes "targeted positions of the regime forces in the Idlib and Aleppo countryside".

The killing of Turkish troops by President Bashar al-Assad's forces -- backed by Russian air power -- has sent tensions between Ankara and Moscow soaring.

On Friday, Erdogan spoke by phone with his Russian counterpart, Vladimir Putin. He may travel next week to Moscow for talks, according to the Kremlin.

But the Turkish leader remained critical on Saturday.

"I asked Mr Putin: 'What's your business there?'," Erdogan said. "If you establish a base, do so but get out of our way and leave us face to face with the regime."

French President Emmanuel Macron called on Russia and Turkey to establish a "lasting ceasefire" in the Idlib region, after separate phone calls with the two countries' leaders, a statement from his office said.

Seeking support from Europe after the Idlib casualties, Erdogan told Macron that Ankara wanted to see "clear and concrete support" from NATO "not only in words but in deeds", according to the Turkish presidency.

Erdogan also warned the humanitarian crisis would "deepen unless the regime's attacks are stopped in Syria."