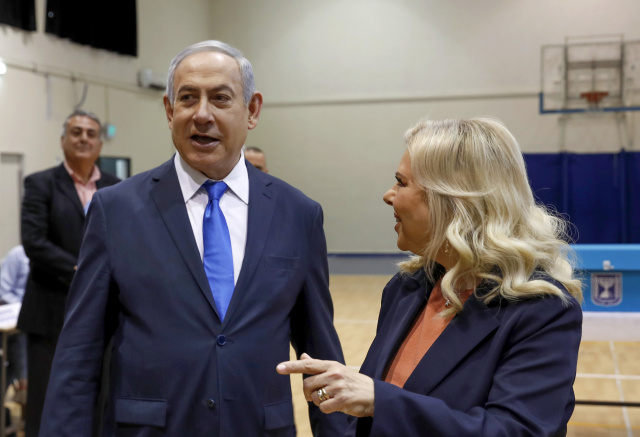 Israeli Prime Minister Benjamin Netanyahu (L) and his wife Sara Netanyahu arrive to a polling station in Jerusalem to cast their ballots for the Israeli legislative elections, on March 2, 2020. Netanyahu urged people to vote despite widespread concerns about the coronavirus outbreak, as the longest-serving leader in the Jewish state's history cast his ballot. Israelis were voting for a third time in 12 months today, with embattled Prime Minister Benjamin Netanyahu seeking to end the country's political crisis and save his career. (ATEF SAFADI / POOL / AFP)

(AFP) - Prime Minister Benjamin Netanyahu emerged victorious Tuesday after Israel's third election in a year despite a looming corruption trial, dismaying the Palestinians who were angered by his hardline campaign pledges.

Monday's election left the veteran right-winger in prime position to form a government and end a year of political deadlock, after similar votes in April and September proved inconclusive.

The central election committee said it had counted 90 percent of the vote, with breakdowns of the result in the media showing Netanyahu's Likud party with 36 seats in Israel's 120-member parliament.

That would mark the party's best-ever result under Netanyahu, Israel's longest-serving prime minister and its first to be indicted in office.

Netanyahu's bloc, which includes ultra-Orthodox Jewish parties, is likely still one or two votes short of a majority, but his party spokesman said it was confident of luring defectors.

Counting its centre-left allies as well as the mainly Arab Joint List alliance, the anti-Netanyahu camp was expected to control 54 to 55 seats.

While there remains no guarantee that Netanyahu can form a coalition, he hailed Monday's election as a "giant" success.

"This is the most important victory of my life," he told supporters in Tel Aviv where people danced, sang and shouted "Bibi, king of Israel," using the premier's nickname.

Netanyahu campaigned on his tough position towards the Palestinians and on expanding Jewish settlements in the occupied West Bank.

He also pledged to annex the Jordan Valley, a key part of the West Bank that Palestinian see as crucial for their future state, if he won.

But he stressed that regardless of the final tally Netanyahu is still due to go on trial on March 17 after being charged with bribery, fraud and breach of trust.

"In two weeks, he will be in court," Gantz said.

While Netanyahu will likely be tapped by President Reuven Rivlin to form a government, he has no immediate path to a 61-seat majority.

The projections indicate that the secular, nationalist Yisrael Beiteinu party won six or seven seats and may again be able to play kingmaker, the same position it was in following the April and September votes.

Party leader Avigdor Lieberman served as defence minister in a previous Netanyahu government and his support would easily put Likud over the crucial 61-seat line.

But after the September vote Lieberman said he would only join a government of national unity -- ruling out cooperation with the ultra-Orthodox parties allied to Netanyahu and the Arab camp that backed Gantz.

"There is no choice but to wait for the final results and only then conduct a situation assessment," Lieberman said after the exit polls were released.

In a statement, Likud said Netanyahu had spoken to all the heads of right-wing parties and "agreed to form a strong national government for Israel as soon as possible".

Netanyahu will now begin talks with a number of opposition MPs and parties in a bid to encourage defections, though the process could take weeks.

Likud party spokesman Jonathan Urich told Israeli army radio Tuesday they had already reached out to a number of lawmakers.

"I believe that soon enough we'll find the missing seats from the other bloc," he said. "People on the other side understand it's the right thing to do."

Bolstered by US support, Netanyahu campaigned on building thousands more homes in Jewish settlements in the Palestinian territory, even though they are considered illegal by the international community.

Gantz, a security hawk, was also supportive of the Trump plan, sparking criticism from the left that he did not offer a real alternative to Netanyahu.

The vote was held amid the coronavirus outbreak, with special polling stations set up for thousands of Israelis under quarantine who were met by election staff in full protective suits and masks.