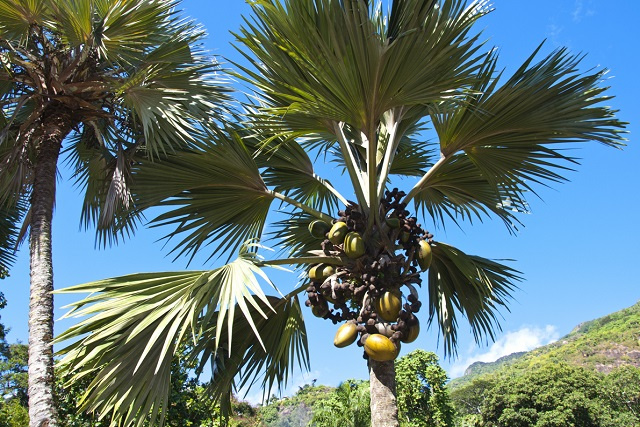 (Seychelles News Agency) - Victoria, the capital city of Seychelles - also referred to as the smallest capital of the world – has over the years gone through several transformations.

Through the passage of time, the city has seen a boom in construction but one thing has been kept as much as possible and that is its green landscape.

A stroll in Victoria will leave you pleasantly surprised as some of the island nation’s rarest and endemic flora can be found in the city.

Here are four plants to discover in Victoria.

Seychelles’ coco de mer is the stuff of legend. It is one of the many wonders of the island nation and considered a giant in the plant kingdom.

The coco de mer grows naturally only on two of Seychelles’ islands. On Praslin, the second most populated island, in the Vallee de Mai special reserve which is also one of the island nation's UNESCO World Heritage sites, and on Curieuse, located very close to Praslin.

Planted also on Mahe, most trees can be found in the Botanical Gardens and the State House garden but one tree can also be seen on Revolution Avenue.

Currently, there are six palm trees which can be found only in Seychelles. Walking along 5 June Avenue, palm trees can be seen, including the Latannyen Palmis – known in English as Deckenia nobilis.

This is well known in the culinary field as the heart of the palm is edible and made into the millionaire's salad. The name was given because once the palm hearts are harvested the whole tree dies. It went into decline due to unregulated and illegal harvesting. It is under legal protection today.

These trees can be found mostly on mountainous areas and on Mahe they can be found in the northwestern region of San Soucis and Grand Anse Mahe. The Mimusops seychellarum or Bwa de nat as it is known locally can also be seen in some coastal regions.

Over the years the trees were exploited for their timber but currently, they are protected as Bwat de nat is on a list which includes some of the rarest species of the islands which are classified globally as Near Threatened.

One such tree can be seen on Albert Street, in the centre of Victoria.

Ficus bojeri is a species of plant in the family Moraceae. It is a fairly small ficus, or fig, a tree with small branches and oval-shaped leaves. It is greyish-brown in colour. The fruit hangs from the trunk of the tree on centimetre long twigs.

Right in the heart of Victoria, at the Independence Avenue, one can enjoy a marvel of nature where a ficus - lafous - has attached itself and growing on cordia tree locally known as porse.

The combination offers people in the city a nice shady area, to pose and greet others or simply stand and watch as time slowly ticks away on our own little Ben!