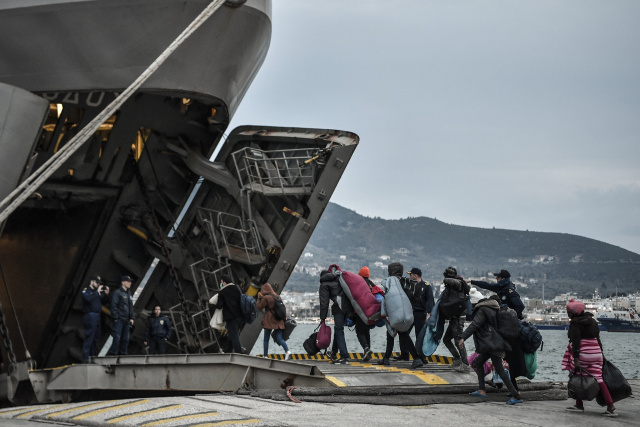 First groups of recently arrived refugees and migrants enter a warship provided for their accomodation on the port of Mytilene on the island of Lesbos, on March 4, 2020. Turkey's president warned on Wednesday that a fresh migrant crisis could be resolved only if Europe supports its efforts in Syria, as violent clashes broke out between refugees and police on the Greek border. (LOUISA GOULIAMAKI / AFP)

(AFP) - EU members on Wednesday rejected what they said is Turkey's use of desperate migrants to pressure its neighbours -- and strongly backed Greece's border crackdown.

In a statement agreed by European interior ministers meeting in Brussels, the 27 capitals said the "situation at the EU's external borders is not acceptable".

Earlier, Turkish president Recep Tayyip Erdogan's government had denied that it was using the threat of a wave of migrants to "blackmail" the EU.

But the EU statement said the bloc "strongly rejects Turkey's use of migratory pressure for political purposes".

Ankara wants Brussels to step up support for the 3.7 million refugees and migrants that Turkey is already hosting, and back Turkey in its increasingly intense confrontation with the Syrian regime.

But EU members insist Turkey must stick to a previous deal in which Brussels agreed to pay billions of euros in exchange for Turkey preventing refugees and migrants from crossing to Greece.

"Illegal crossings will not be tolerated," the EU statement said.

"In this regard, the EU and its Member States will take all necessary measures, in accordance with EU and international law.

"Migrants should not be encouraged to endanger their lives by attempting illegal crossings by land or sea."

The ministers urged Turkey to "relay this message and counter the dissemination of false information".

Top EU officials visited Greece and its border on Tuesday, and offered Athens their full solidarity and a 700-million-euro package of support for border security.

There, the president of the European Commission, Ursula von der Leyen, praised Greek premier Kyriakos Mitsotakis, going so far as to call Greece Europe's "shield" against the influx.

On Wednesday, ministers from the member states agreed.

"We must also remember that this is not a random humanitarian crisis, but a guided and accentuated action by Turkey against Europe. Greece is protecting the EU against it," he said.

Nehammer's German colleague Horst Seehofer agreed that Greece was facing a particular challenge at this time, which justified its decision to stop allowing arrivals to make asylum claims.

"Yes, it's in order, given the situation. Greece is doing a very important job for all of Europe, protecting our borders," he said as he arrived at the European Council.

French Interior Minister Christophe Castaner warned that Turkey's decision to let the migrants leave had confronted the bloc with "a perhaps historic moment" to secure its frontiers.

Margaritis Schinas, the EU commissioner for migration and promoting the European way of life and himself a Greek, said he hoped the crisis would lead to broader immigration reform.

This showed that when Europe wanted to it could act swiftly, he said. "Everything we have been doing for the last three days is clearly an indication that the Europe that protects is possible."

Criticism of Greece's tactics was being fed by "propaganda", he said. Denying live rounds had been fired near migrants, he said it was just "probably some rubber bullets".

Social media footage from the Aegean region has shown what appears to be Greek authorities intimidating and endangering migrants clinging to unstable rubber dinghies.

Human Rights Watch director Lotte Leicht said: "If the EU's highest officials are willing to turn a blind eye to such abuses and violations of international law, they just invite more of the same."

But senior EU officials have repeatedly warned of the danger of "fake news" being weaponised to undermine European solidarity.