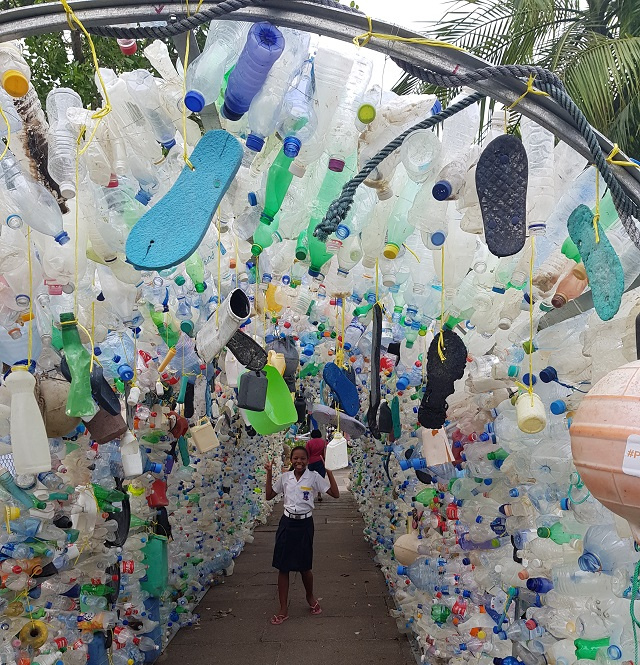 ‘Plastic Ocean Arch’, a piece of art in the capital Victoria to raise awareness of the dangers of plastic pollution to marine life. (Seychelles News Agency)

(Seychelles News Agency) - The efforts Seychelles is making to reduce plastic waste in the environment was highlighted in a discussion between the Secretary General of the Basel, Rotterdam and Stockholm conventions and President Danny Faure on Wednesday.

Seychellois Rolph Payet, who is heading the first meeting of the Basel Convention's Plastic Waste Partnership in his homeland, told reporters that "Seychelles has made a lot of effort to try and deal with this issue. A lot of non-government organisations have worked together to pick up the plastics."

Payet said the discussion was also on "actions that we are taking internationally to resolve the issue of plastic waste. Most of the plastic waste is produced outside of Seychelles and are being dumped in our waters by the current. The only solution is to stop the source where the plastic originates."

The Basel, Rotterdam and Stockholm Conventions are multilateral environmental agreements which share the common objective of protecting human health and the environment from hazardous chemicals and wastes.

Around 120 delegates from different parts of the world are attending the first meeting of the Basel Convention's Plastic Waste Partnership hosted by the government of Seychelles. The meeting is being held at the Savoy Resort & Spa and ended on Thursday.

In his address at the opening of the meeting earlier this week, the Minister of Tourism, Didier Dogley, said that Seychelles can be used as a model of small island developing states, taking unpopular decisions in curbing the issue of plastic waste.

"At the national level a series of measures targeting plastics and plastic population have been put in place," he added.

Minister Dogley noted that it was time that a legally binding framework is formed so as to ensure control and environmentally sound management of plastics.

Legislation for plastic waste management was also discussed between Payet and Faure and how to encourage recycling.

"Since last year we have worked with other countries to modernise their laws and to put in place mechanism for them to better manage their waste," said the Secretary General.

Plastic waste pollution can affect land, waterways and the oceans when dumped carelessly. The living organisms, particularly marine animals become vulnerable either by mechanical effects, such as entanglement in plastic objects or by ingestion of plastic waste.