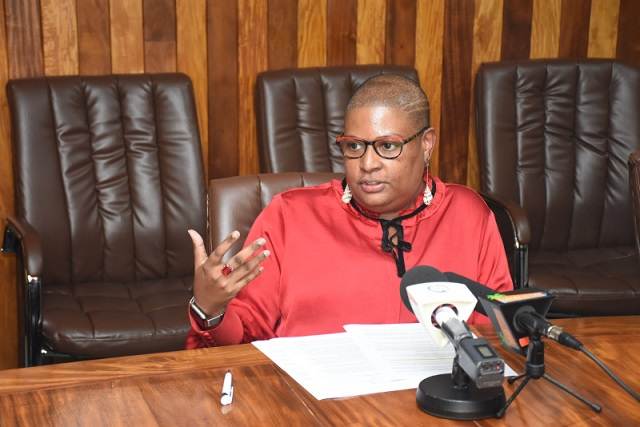 The Governor of the Central Bank, Caroline Abel, gave an in-depth outlook on the Seychelles' economy.

SNA spoke to the Governor of the Central Bank, Caroline Abel, for an in-depth outlook on the economy of Seychelles, an archipelago in the western Indian Ocean.

SNA: When you analyse the present economic situation of the country, do you see a fragile economy?

CA: Seychelles’ economy depends on global factors and is affected by what happens globally which means it will always remain vulnerable.

Our economic activities are service-oriented like tourism for example which depends on other countries. We also have trade where the majority of what we use or consume either as individuals or companies, is imported because we don’t have the resources to produce these things.

It is because of this that we have to ensure that our policies reflect the domestic and international realities.

As you can see there is a direct impact on our economy. That is why we have to constantly monitor the economy both nationally and internationally, and ensure that we react on time to minimise the negative impact.

Another present threat to the economy is the outbreak of coronavirus globally which will have a direct impact on our economy as travellers cancel their holidays to Seychelles. A reduction in the number of tourists will mean less foreign exchange coming into the country, thus reducing our ability to import goods, hiking the price of foreign exchange and causes inflation.

There are instances where we tighten the monetary policy system although we know it will have a negative impact on consumers especially their ability to take out a loan. But these are steps that we have to take to maintain the balance in the economy and ensure we have an inflation rate that is acceptable and manageable.

We don’t have control over what goes on globally, which puts us in a vulnerable position but we can react on time to minimise the impact.

SNA: What inflation rate would you say is acceptable for Seychelles?

CA: For a whole, the Central Bank of Seychelles was saying five percent. But in today’s context, an increase of 5 percent is considered quite high on an average income. At present, the rate is 1.7 percent which is quite reasonable.

SNA:  Why did the Board of the Central Bank review the monetary policy rate in September from 5.5 percent to 5 percent and maintain it for the first quarter of 2020?

CA: The decision is based on our forecast on inflation in the next 12 months. When we look at the budget for 2020, information collected in the market, domestic and international developments, there is no indication that inflation rate would be high in the next twelve months.

Because inflation is stable, we feel comfortable to relax the monetary policy. If the inflation forecast was more than what we have foreseen, then CBS would have taken another position and further tighten it or keep it at 5.5 as was the case previously.

But as we see it, fuel, one of our commodities, is not expected to rise because production has dropped in countries like China as a result of coronavirus. Fuel price globally might even go down, which is good news for countries like Seychelles.

Apart from fuel, production of main commodities remains stable as there are no issues affecting production in countries where we import our goods. All these are positive factors which indicate that the inflation rate could remain stable.

SNA: But won’t relaxing the monetary policy, lead to more consumption and eventually lead to inflation?

CA: Relaxing the monetary policy rate will lead to a reduction in the interest rate in commercial banks, meaning increasing the ability to loan money to individuals or companies, as it becomes slightly cheaper to take out loans.

When we do this adjustment, we have to constantly monitor and assess demands for loans to ensure it does not have an impact on inflation. Basically, when giving out loans, a large percentage of the loan in rupees will be converted to foreign exchange.

So the central bank has to determine what percentage that is borrowed would be converted into foreign exchange, and if the amount of foreign exchange we are buying will have an impact on the exchange rate.

From what we’ve seen so far since we relaxed the monetary policy rate in the last quarter of 2019, there has not been any pressure on the exchange rate which has remained stable as a result of an increase in revenue from the tourism sector.

That’s why it has not had a negative impact on inflation.

SNA: Won’t the fact that the government also injects large sums of money into the economy defeat the purpose of reducing inflation?

CA: Because we had information about the 13th-month salary, we anticipated what it would do in the system once all the workers were paid.

So taking into account the amount of money that would be disbursed, we removed liquidity ahead of the disbursement to ensure it did not send shockwave in the economy.

SNA: Why do you think Seychelles has been blacklisted and is now seen as not being compliant?

CA: This question would better be answered by the Financial Services Sector. But one thing I would like to say on the matter is that Seychelles’ being blacklisted affects the country’s reputation globally. It has an impact with regard to our relationship with other international organisation or financial institutions.

It is important that as a country, all agencies and regulators ensure that our reputation is not tarnished overseas.

Our offshore sector should be compliant and already some stops are being taken to make it compliant.

SNA: Are some corresponding banks threatening to stop transacting with Seychelles after it was blacklisted?

CA: It’s not a matter of threatening us. What we should understand is that corresponding banks are the ones clearing foreign exchange for local banks because local banks cannot carry out such transactions. When Seychelles’ reputation is tarnished, these banks would not want to have anything to do with our local banks.

I’m not saying that our reputation is bad at the moment, but the perception following our blacklisting indicates that some banks may think something is wrong with the Seychelles’ financial system.

That’s how the word ‘derisking’ was introduced. Some corresponding banks may think that because our economy is so small, it is not worth transacting with us. In fact, our challenge started in 2014 following the closure of BMI Bank. So we need to be able to manage these challenges.

SNA: The Central Bank of Seychelles issued treasury bonds during the past two years is there plan to have similar bonds in the future?

CA: We noticed that when we opened the bond to everyone, very few individuals invested in the bonds. It was mostly companies or financial institutions which have the financial ability to buy bonds, which we're investing in the treasury bonds. That is why we issued a bond on behalf of the Property Management Corporation in January 2020 and said only individuals could apply either alone or jointly.

We have given them a 30-day period after which the bonds will be offered to commercial banks, corporate bodies, institutions, clubs, societies and other organisations. We are also exploring other options on how people could invest their money in the future.

The Interview » Be a reporter: Write and send your article » Subscribe for news alert
Tags: Central Bank of Seychelles, coronavirus