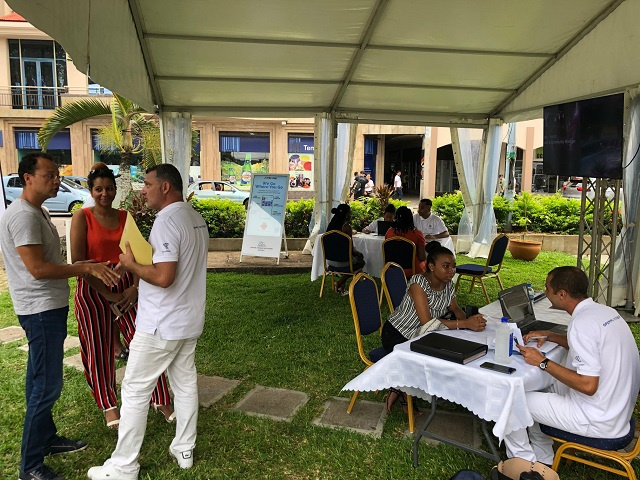 At the open-air event on the grounds of the National History Museum in Victoria, locals were given information on the Club Med concept. (Club Med)

(Seychelles News Agency) - Club Med is looking for job applicants in Seychelles, as the hotel searches for people to fill more than 400 positions before it opens in October.

The former Beachcomber Sainte Anne Resort & Spa will reopen as Club Med following renovations to transform the hotel from 87 rooms to a 5-star resort of 295 rooms bringing with it its new concept and values.

During a two-day event last week the resort unveiled its plans to locals. Attendees could learn about the different advantages of working with Club Med, which has around 23,000 staff around the world.

The manager said, “The gentle employees occupy classic posts found in the hotel industry but above all, they must share the same values of Club Med.”

At the open-air event on the grounds of the National History Museum in Victoria, locals were given information on the Club Med concept, its philosophy, its resorts around the world and its human resources policy through presentations and one-to-one interviews.

Club Méditerranée SA, commonly known as Club Med, is a French public limited company specialising in the sale of all-inclusive holidays at in a number of "vacation villages" which it owns and operates in a number of usually exotic locations around the world. Club Med is currently managing more than 70 resorts.

The future employees of Club Med Seychelles will have the opportunity to work outside of Seychelles - 115 islands in the western Indian Ocean - via its international mobility policy.

"We invite all these young Seychellois who really want to live a unique Club Med experience to come and join us because they will be able to boost their skills, surprise themselves and forge authentic links with several colleagues of different nationalities," said Dhubert.

Club Med has started discussing with the Seychelles Tourism Academy on working together in training and recruiting the right personalities for the resort.

Flavien Joubert – chief executive of the academy -- has described the new concept as innovative and wonderful. “However this concept to some extent did exist in Seychelles and practised by the Club Vacanze on Praslin but then came the four and five-star resort and the concept died,” explained Joubert.

According to Joubert, this concept will be taken as part of the academy’s in-service training as a delegation from the academy was in Mauritius to experience what Club Med offers.