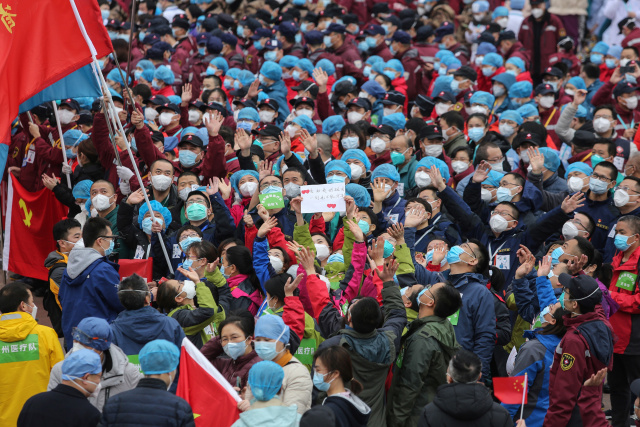 Medical staff celebrate after all patients were discharged at a temporary hospital set up to treat people with the COVID-19 coronavirus in Wuhan in China's central Hubei province on March 9, 2020. China closed most of its makeshift hospitals for coronavirus patients, some schools reopened and Disney resort staff went back to work on March 9 as normality slowly returns to the country after weeks battling the epidemic. (STR / AFP)

(AFP) - The global death toll from the new coronavirus passed 4,000 on Tuesday, according to AFP figures, as China reported 17 new deaths.

The epidemic has disrupted global travel and forced the cancellation of everything from conferences to sporting events.

But in China, new cases have steadily declined in recent weeks, in a sign that the country's unprecedented lockdown measures appear to be working.

There were just 19 fresh cases reported on Tuesday, the lowest number since the government started tallying infections on January 21, according to the National Health Commission.

All the new infections were in the virus epicentre, the central city of Wuhan, except for two imported cases brought in from overseas.

This means there were no indigenous cases in the rest of the country.

The 17 new deaths were all in central Hubei province -- 16 in Wuhan, the capital of the province -- bringing the country's nationwide toll to 3,136.

It is the lowest daily toll since late January.

More than 80,750 people have now been infected in China, which has imposed unprecedented lockdown measures to try to control the spread of the virus.

But fears are growing that as cases of the disease grow overseas, China's progress could be undermined by the virus being brought back into the country from other nations.

There have now been 69 imported cases, according to Chinese health officials.

The World Health Organization said Monday that more than 70 percent of those infected with the new coronavirus in China have recovered, adding that the country was "bringing its epidemic under control".

And there were tentative signs in recent days that some of the measures to restrict the movement and gathering of people could be lifted, with some regions reopening schools or announcing dates to resume classes.

Most of the 16 makeshift hospitals opened in Wuhan have been closed -- with the last two expected to shut Tuesday.

And Shanghai Disney said it was reopening its shopping and entertainment Disneytown zone in the "first step of a phased reopening", although the amusement park remains closed.