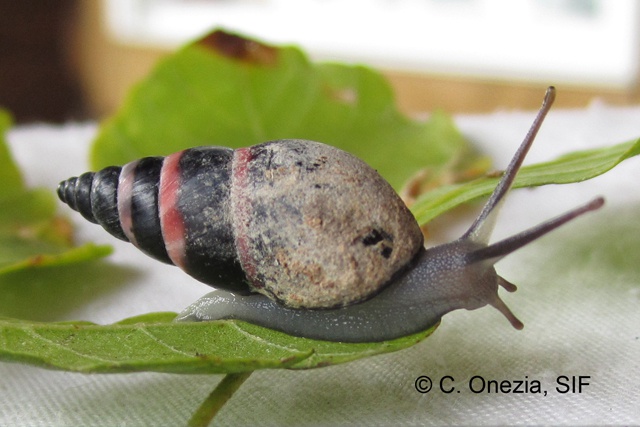 (Seychelles News Agency) - Amid news of rising sea levels, extreme weather patterns and species under threat of extinction, a tiny snail on a tropical island in the western Indian Ocean archipelago of Seychelles is giving scientists hope that nature may be more resilient than originally thought.

The Aldabra banded snail (Rhachistia aldabrae), with its distinctively-hued purple shell intersected with bands of bright pink, endemic to the UNESCO World Heritage Site of the Aldabra Atoll, was last seen in 1997 on the islands of Picard, Malabar, Polymnie, Esprit and Grande Terre. After extensive searches of all the islands in the atoll, the species was declared extinct by Justin Gerlach in a paper published in 2007.

The Aldabra Atoll is one of the largest and most pristine raised coral atolls in the world. Designated a World Heritage Site by UNESCO in 1982, Aldabra is managed and protected by the Seychelles Islands Foundation (SIF), a Public Trust established in 1979.

Aldabra is an undisturbed refuge for a variety endangered species, including the world’s largest population of Aldabra giant tortoises and plays host to one of the largest congregations of nesting green sea turtles in the Indian Ocean.

It was thought that decreasing rainfalls in the atoll was the cause of the Aldabra banded snail’s demise, leading to widespread claims that the species was one of the first known casualties of climate change.

Happily, however, it seems that the rare invertebrate has lived to fight another day after a junior staff member of SIF, discovered a snail he did not recognise on August 23, according to a press statement from SIF. Junior Skipper Shane Brice was exploring dense mixed scrub in a rarely-visited area of Malabar, the second-largest island in the atoll.

“I was bush-bashing through the scrub when I spotted a mysterious snail that I’d never seen before on the island, I was very excited!” he said.

After hearing that the snail was found on an endemic tree, Senior Ranger and Assistant Training Officer Catherina Onezia felt a faint glimmering of hope that it might be the extinct snail.

“When Shane showed me the snail I thought deep down, surely it can’t be the endemic snail! I only dared to believe it once I checked it out back at the office”.

After conducting further searches of the area, several other snails were found, including juvenile snails, which was viewed by the conservation experts as a very encouraging sign as the last juvenile snails were seen by scientists in 1976. The discovery was confirmed by Dr Vincent Florens, a mollusc expert from the University of Mauritius and famed Seychellois naturalist Pat Matyot.

The SIF believes that the discovery provides an “incredible second chance to protect and study this historical species in the wild and ensure that it is not lost again”. Even though climate change may not have caused the snail’s actual demise as a species, changing weather patterns still put the rare snail at risk for its continued survival.

A beacon of hope

“This snail provides hope for other island species, of which we have already lost too many,” said Fleischer-Dogley.

“I hope that those of the international community, who are meeting at the third international conference on small island developing states, take note that their investment is needed to generate such success. Nature has a resilience that may surprise us”.