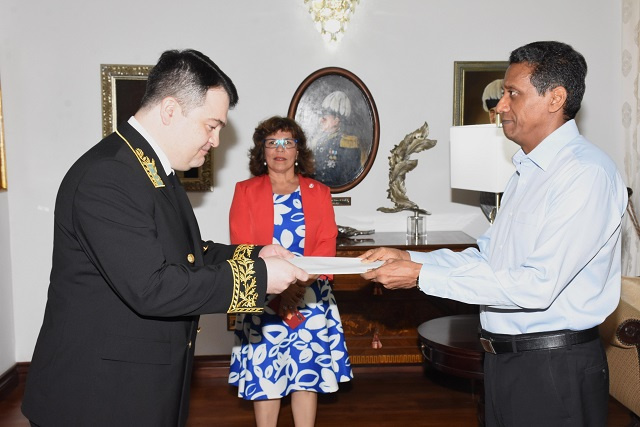 (Seychelles News Agency) - Russia is looking forward to co-operating with Seychelles in several fields including space technology to help in the fight against the impact of climate change, the newly accredited Ambassador said on Tuesday.

"We all have to fight with the negative consequences of climate change which is very important for this part of the world. This is one more sphere where space technology could be useful. Space is not only about but science but it's also about saving the planet. We feel very optimistic in starting these projects and fulfilling these ambitious dreams,” Artyom Alexandrovich Kozhin said after presenting his credentials to President Danny Faure.

Russia will next year celebrate the 60th anniversary of the trip by Yuri Gargarin, a Soviet Air Forces pilot and astronaut, who became the first human to journey into outer space on April 12, 1961.

Ambassador Kozhin said that Russia "could in the nearest future begin cooperation in space exploration with the Seychelles. Russia has great scientific experience in various fields including exploration of outer space which I hope could be useful to the Seychelles to fulfilling the dream of the nation."

Another potential field of cooperation between Russia and Seychelles, an archipelago in the western Indian Ocean, is in investment.

Kozhin said the Russia Africa summit last year opened a new door and paved a new way of boosting the economic cooperation between Russia and countries of the African Union including the Seychelles.

"We were all impressed by the participation of the President of Seychelles in the investment section of the economic forum. I hope that we this will additionally boost the economic cooperation between our countries," he said.

Tourism is also a field for cooperation and Kozhin said that Seychelles is a favourite tourist destination for Russians.

Ambassador Kozhin who will be based in the island nation is also inviting Seychelles media to accredit to Russia.

"We don't have many bureaus from Africa accredited to Russia so Seychelles media has the opportunity to open a bureau in Russia. It could be a newspaper or agency, or a TV channel. We'll be absolutely happy to host you in our country for the media which plays a special role in bridging people," he said.