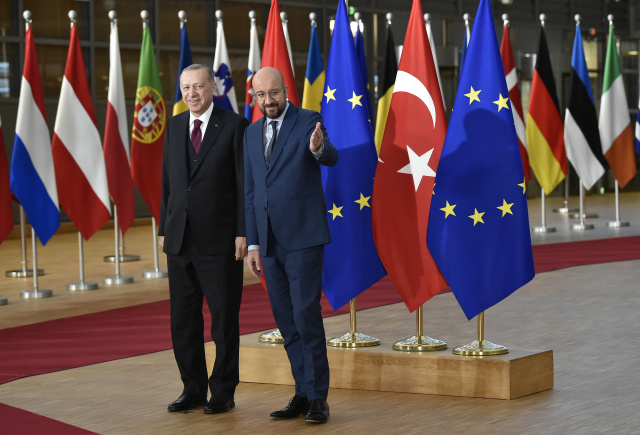 (AFP) - Stern-faced EU leaders warned President Recep Tayyip Erdogan on Monday to respect the terms of a previous deal to keep migrants away from Europe's borders, after the Turkish leader came to Brussels to demand more support.

There was no disguising the tension at the European Council after the talks, with Erdogan choosing to head straight for the airport rather than a news conference with EU presidents Ursula von der Leyen and Charles Michel.

"Clearly we do have our disagreements, but we have spoken plainly and we have spoken openly to each other," Von der Leyen, the head of the European Commission, told reporters.

Von der Leyen and Michel both stressed that the 2016 deal between the EU and Turkey -- under which Ankara agreed to block migrants and refugees from heading to Greece in exchange for billions of euros in EU aid -- remains valid.

And Michel said that the top EU diplomat, Josep Borrell, would be working with his Turkish counterpart foreign minister Mevlut Cavusoglu in the next few days "to be certain that we are on the same page that we have the same interpretation about what we do, in Turkey and at the level of the European Union, in order to implement the deal."

Erdogan did not speak to reporters after the meeting, despite Turkish officials saying earlier that he planned to do so. A Turkish presidential source said only: "The meeting at the EU was productive."

Beforehand, Erdogan had made clear that his priority was to seek more support for his country in the conflict in Syria and to cope with millions of refugees from the fighting.

Before heading to the European Council, he held talks with NATO secretary general Jens Stoltenberg, and told him bluntly: "NATO is in a critical process in which it needs to clearly show its alliance solidarity."

"Our allies should display their solidarity with our country without discrimination and without laying down political conditions," he said. "It is very important that the support we demand is met without any further delay."

Erdogan also appeared annoyed that -- rather than listening to his concerns -- Von der Leyen and Michel have backed Greece as Europe's "shield" against migrants encouraged to leave Turkey.

And he had harsh words for Prime Minister Kyriakos Mitsotakis' Greek government, which has already been allocated 700 million euros ($800 million) by Brussels to secure his borders and cope with the new arrivals.

"It is irrational and inconsiderate that an ally and a neighbouring country point to Turkey as responsible for the irregular migration," Erdogan said.

"We will not allow this country to try to get unfair gains by using its current position."

Mitsotakis did not take such talk lying down, responding furiously in an address to the German Council on Foreign Relations.

"Why do we spend so much on defence? It's because our neighbour is Turkey and not Denmark," he said. "As prime minister of Greece I don't have to listen to lessons on human rights from Turkey."

Tens of thousands of asylum-seekers have been trying to break through the land border from Turkey for a week after Ankara announced it would no longer prevent people from trying to cross into the EU.

Turkey, which hosts around four million mostly Syrian refugees, has repeatedly railed against what it describes as unfair burden-sharing.

Germany said the EU was considering taking in up to 1,500 child refugees to ease pressure on overwhelmed camps on Greek islands facing a new wave of arrivals from Turkey.

On Friday, Erdogan ordered the Turkish coastguard to prevent risky Aegean sea crossings after more than 1,700 migrants landed on Lesbos and four other Aegean islands.

But Turkey's policy of allowing migrants and refugees to leave by land remains in place, and the instruction only affects sea crossings.

In 2016, Turkey and the EU agreed a deal whereby Brussels would provide billions of euros in aid in exchange for Turkey curbing the flow of migrants.

But Ankara has repeatedly accused the bloc of not fulfilling promises made as Europe suffered its worst refugee crisis since World War II, when over one million people fled to the continent in 2015.

Erdogan has felt extra pressure as nearly one million people in Syria's northwestern province of Idlib fled towards the Turkish border during a recent Syrian regime assault backed by Russia and Iran.

But Erdogan and his Russian counterpart Vladimir Putin agreed a ceasefire on Thursday after Turkey launched an offensive against Damascus following the deaths of 59 Turkish security personnel in attacks blamed on the regime.