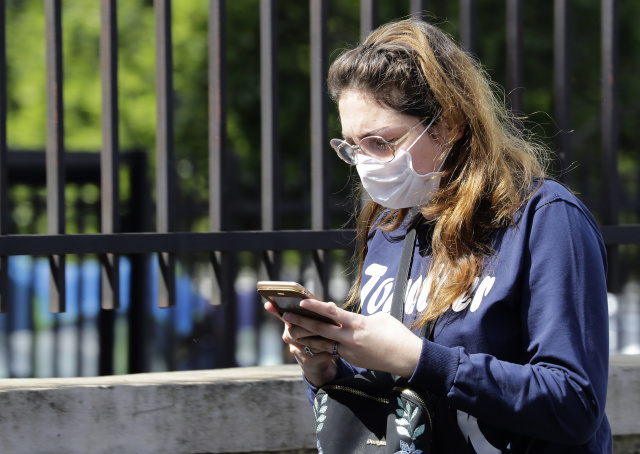 The US response has infuriated European allies, and China has gone on a propaganda offensive. The new coronavirus is shaping up to be a cataclysmic event with far-reaching consequences in global politics. (Angela Weiss / AFP)

(AFP) - Thousands of people have died, the US response has infuriated European allies, and China has gone on a propaganda offensive. The new coronavirus is shaping up to be a cataclysmic event with far-reaching consequences in global politics.

The COVID-19 pandemic, which has infected more than 130,000 people globally, strikes a world already in flux with the rise of nationalists such as US President Donald Trump who have scoffed at the rules of the "globalist" order.

"When the dust settles on the COVID-19 world, we won't be in the same place that we were just a week ago," said Jon Alterman, a senior vice president at the Center for Strategic and International Studies in Washington.

"We know that governments will shake as citizens judge them to have fumbled in their response. We know that economies will be disrupted and some economies are likely to collapse," he said.

Trump, who initially dismissed the risks of COVID-19, late Wednesday abruptly imposed a 30-day ban on most travel from mainland Europe and vowed to confront the "foreign virus."

Leaders from the European Union voiced outrage at the move, which triggered chaos at airports, and said that they had not been consulted -- which Trump acknowledged.

Kelly Magsamen, the vice president for national security and international policy at the left-leaning Center for American Progress, said Trump's move would only increase questions about Washington's historic leadership role.

"I think a lot of partners and allies are saying, can the US be relied upon to lead on major global challenges -- whether it's a pandemic or whether it's climate change or nonproliferation?" she said.

"It's going to have effects on other dimensions of our relationship."

COVID-19 first emerged late last year in the Chinese metropolis of Wuhan -- likely at a market that sold exotic animals for their meat -- and Beijing initially tried to suppress the news including by detaining the doctor who sounded the alarm.

But China in the past week has sought to turn its COVID-19 response into a sort of soft power, with President Xi Jinping visiting Wuhan to trumpet success at containing the spread.

China has sent medical equipment to Italy, the second-worst hit country, and Spain, highlighting its authoritarian model as decisive.

It has also used the crisis as leverage against the United States, which has been seeking to combat Beijing's influence in all areas.

An article in the state-run Global Times unsubtly hinted that China could stop exports of face masks and other medical gear if the Trump administration keeps pressing to restrict its tech giant Huawei.

China as well as Russia has also promoted unfounded conspiracy theories to discredit the United States. Chinese foreign ministry spokesman Zhao Lijian suggested on Twitter that the US military may have brought the new coronavirus to Wuhan.

The Trump administration, which has offered $100 million in aid worldwide to help other countries deal with the pandemic, has in turn sought to associate China firmly with COVID-19.

Secretary of State Mike Pompeo speaks of the illness as the "Wuhan virus" and Republican Senator Tom Cotton has vowed that the United States will "hold accountable those who inflicted it on the world."

- Revenge of the technocrats? -

Michael Green, who was the top Asia advisor to former president George W. Bush, doubted that China would ultimately find many buyers for its "arguments about the failures of democracy."

But he added: "That does not mean that the US will win this information battle."

"While the Japanese and others in Asia are not getting the shock treatment that the Europeans got overnight, there is a very strong sense of questioning American leadership right now," said Green, now a senior vice president at the Center for Strategic and International Studies.

In one example, Green pointed to the stalemate in talks over South Korea's contributions to US bases, with Trump irritating the ally by insisting on much higher payments.

One broader effect, Green said, may be a shifting political narrative.

Xi, once seen as untouchable in China, has faced criticism as netizens cheer on doctors -- much like Americans across party lines have hailed Anthony Fauci, the 79-year-old veteran head of the National Institute of Allergy and Infectious Diseases.

Trump's 2016 upset win, Britain's vote to leave the European Union and other populist victories had been seen as proof "that the technocrats failed" following the Great Recession of the late 2000s and the Iraq war, Green said.

"I think it's very possible that the macro result this time could be that the political populists failed and it's the technocrats who emerge as the heroes," Green said.

"We'll see. But that may be how political history turns in this chapter."

General » Be a reporter: Write and send your article » Subscribe for news alert
Tags: US, China, EU