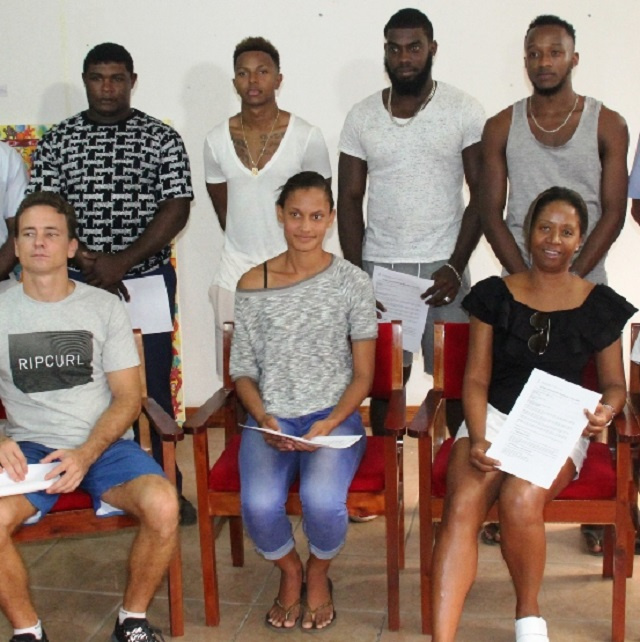 Six Seychellois athletes on the Olympics' scholarship since 2017, missing Govinden and Passon being represented by her mother. (Seychelles Nation)

(Seychelles News Agency) - Seychellois athletes who are training overseas are returning home as countries take more severe measures to deal with the COVID-19 pandemic across the globe, even as the island nation recorded its third case of the virus.

The secretary general of the Seychelles Olympic and Commonwealth Games Association, Alain Alcindor, told SNA on Monday that two athletes have already returned.

Arrangements are being made for high jumper Lissa Labiche who is currently in the United States and sailor Rodney Govinden in Portugal.

Alcindor said that due to the COVID-19 pandemic many Olympic qualification competitions are being postponed.

"This is disrupting the international training programmes of our athletes while those preparing locally are doing fine so far," said Alcindor.

Boxer Keddy Agnes is expected to make another attempt to qualify for the Tokyo 2020 Olympic Games in a competition in Paris, France in May.

"For the time being, we are not sure if this will go ahead. Many competitions which are being organised later have not been cancelled while others scheduled for March and April have been postponed indefinitely," he added.

The secretary general told SNA that usually qualification for athletics and swimming are opened until June.

"There are discussions taking place on whether other qualification events can be pushed to June. The International Olympic Committee is negotiating with some international federations to find out if activities could be delayed. But we have not received any confirmation yet," said Alcindor.

Currently, Govinden and Passon are the only two Seychellois athletes who have qualified for the Tokyo 2020 Olympic Games scheduled for July 24 to August 9.

The chief executive of the National Sports Council, Jean Larue, has also announced on Monday that all sporting activities are cancelled until further notice.

Meanwhile, Seychelles, a group of 115 islands in the western Indian Ocean, has three confirmed cases of COVID-19.

The first two cases announced by the Public Health Authority on Saturday were a Seychellois couple who had travelled to Italy. The third case which was confirmed on Sunday is a visitor from the Netherlands who arrived on the same flight as the Seychellois couple on March 11.

The visitor has been admitted at the Anse Royale Isolation Unit accompanied by his partner who will also undergo necessary testing as well.

The Seychellois couple who are in stable condition will remain in the Isolation Unit for treatment and care.