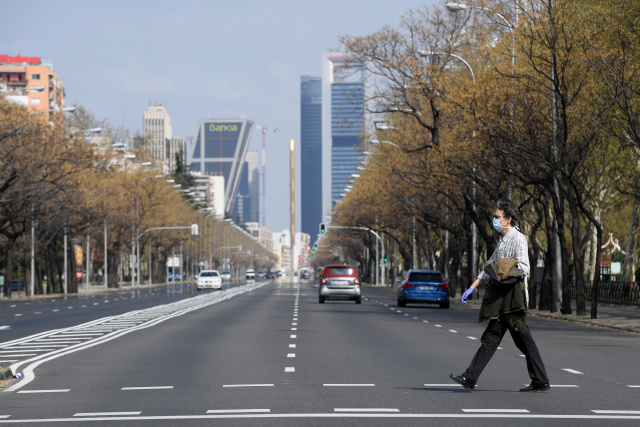 A man wearing a face mask and gloves crosses the usually busy La Castellana avenue in Madrid on March 15, 2020. France and Spain are the latest European nations to severely curtail people's movements as countries across the Americas and Asia impose travel restrictions in a widening crisis over coronavirus, as the number of infections around the world passed 150,000, with nearly 6,000 deaths. (OSCAR DEL POZO / AFP)

(AFP) - The number of people infected with the coronavirus in Spain increased by a third to 7,753 and more than 100 new deaths were recorded over the last 24 hours, health officials said Sunday.

The latest spike in Europe's second-most affected country after Italy comes after the Spanish government imposed a near-total nationwide lockdown, banning people from leaving home except to go to work, get medical care or buy food.

The wife of Spain's Prime Minister Pedro Sanchez is among those who have tested positive for the novel coronavirus, his office said late Saturday, just hours after he announced the lockdown.

Both Begona Gomez and her husband were well, and were at their official residence following the new measures introduced by the health authorities, said a government statement.

The measures were introduced as part of a 15-day state of emergency officially declared by his government on Saturday.

It is only the second time that the government has evoked it since the country returned to democracy following the death of dictator Francisco Franco in 1975.

The other time was during a 2010 air traffic controllers' strike.

Sanchez warned Friday that the number of infections could reach 10,000 in the coming days in Spain.