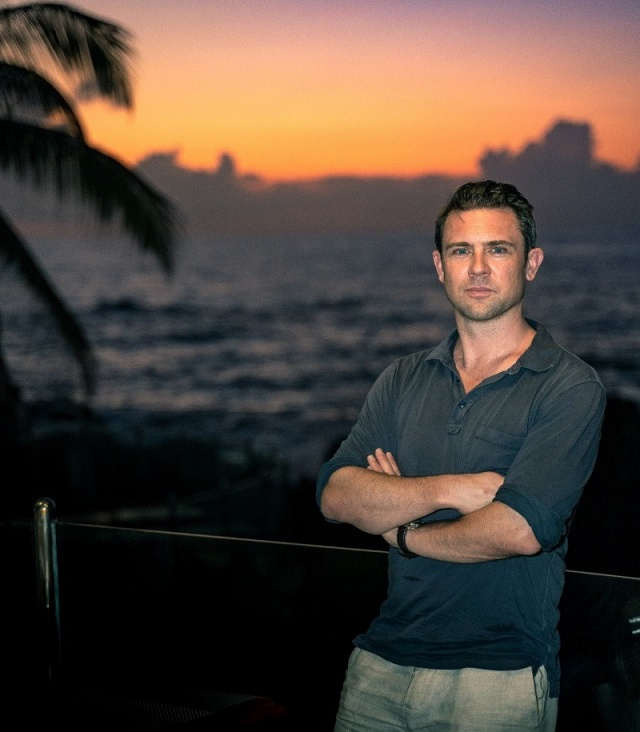 An award-winning poet, Owen Sheers, was in Seychelles to work with students and teachers of the International School Seychelles. (Seychelles Nation)

(Seychelles News Agency) - An award-winning poet, Owen Sheers, was in Seychelles to work with students and teachers of the International School Seychelles. His visit provided the students with a unique opportunity, where they interacted and learned from an author, whose books are covered in the syllabus.

With his two poetry collections - 'The Blue Book' and 'Skirrid Hill' – Sheers won a Somerset Maugham Award and in 2018 was announced as a recipient of the Wilfred Owen Poetry Award.

SNA met with the author to learn more about what drives his writing, the influence of literature and his view about Seychelles' role in the climate crisis.

SNA: Tell us a little bit about how your writing career started.

OS: It started very much with poetry, both as a reader and a writer. I think that, like most writers, I started writing because I was a reader. I wanted to understand how these poets and writers were affecting me. How were these little parcels of language working on me? As is often the case, the best way to work out how something works is to do it. That is how I started writing to work out how this engine of storytelling works. I guess I was writing poems at school and did enter a few poetry competitions when I was 15, 16 years old. Then I studied English at university and I barely wrote a thing for that period. It was after university that I came back to it. I published my first book of poetry when I was 25.

SNA: What genre do you find yourself writing most about?

OS: Over the years, I have moved between genres quite a bit. I started with poetry, then I wrote a non-fiction travel book, then a novel. I have written things for the theatre and for TV, hence, I have written in lots of different areas but really poetry is my foundation. Even when writing for TV or theatre it is quite often in the form of poetry. I am interested in carrying poetry into those media. Poetry is probably my natural thing, but I like having little visits into other forms as well.

SNA: So far, what would you say is your biggest achievement?

OS: My daughters. In terms of writing, I think for me the biggest challenge, the hardest thing to get right is a film poem - 'The Green Hollow' - that I'll be showing here. It is about a tragedy, an accident that happened in a village in Wales in the 60s when a mining slag heap, all of the waste from the coal mine, after lots of rain, collapsed on the village school. It killed 144 people, most of them children in a small village. It has become a very famous story in Wales, Britain and elsewhere. I was asked to write something for the 50th anniversary. I am only saying that this is my greatest achievement because it was such a challenge. To take that kind of story, to work with the community and write something that hopefully they felt was theirs more than min. It was a tribute, a very difficult task that I really struggled with. I think the fact that I wrote that and when the community saw it, they embraced and approved of it, that is probably my greatest achievement.

SNA: In your point of view, how does literature influence the world that we live in today?

OS: Probably not as much as I would like it to. I think that if more of our world leaders read more literature, they would have a greater understanding of humanity, greater empathy. They would be humbler. What I am really interested in at the moment is the role of story and storytellers, in encouraging us to act on the climate crisis and ecological crisis. This is the only story that matters now. Not just for the survival of many species but for our survival.

What is interesting is that so far, our failure to act has been partly because of the failure of a narrative. For some reason, we are not telling the story in such a way that people are engaged. The people are demanding their government to act which is what we need to make happen. Things will only change when the people of the world say that we have got to stop burning fossil fuel, to have systems changed. It can't be about individual responsibility only. It has got to be a system change. We need strong leadership from governments, new regulations, all of which will make most people's lives much better. My question now is, how can filmmakers, storytellers, journalists, all of us who work with stories, contribute to that?

OS: It is interesting of you to say that because everything that I am working on at the moment is about the climate crisis - from an opera to a TV drama, including my next novel. However, there is something else that I want to do, which is more like the film-poem that I was talking about before. I want to somehow create a film-poem that is exactly that - stories from the frontlines of climate change. Not just bad stories but the good stories of adaptations, the success stories.

I read the State of the Nation Address in the Seychelles Nation and I was very interested in what was said about climate change. I was surprised that Seychelles is about to hit its five percent target of renewable energy, but to me, that is in no way near enough. It is not just Seychelles but the world. Yet Seychelles is a country blessed with sunshine and wind. I did also read that Seychelles is pioneering one of the first floating solar platforms which are great but I would have hoped nations like Seychelles, I understand that what they need is help from the world community, has the potential to get close to 80 - 90 percent of renewable energy. Small nations can lead the way, as, because you are small you can something first.

Maybe Seychelles could pioneer the development of smart grids because that is the future. And I must say that I am impressed with the electric cars that I have seen here. I have seen several that you cannot get in Britain yet such as the Hyundai Kona, Nissan Leaf and small nations are perfect for this. Seychelles must be in a very interesting position because you have issues with sea-level rise and coastal erosion, and yet your economy is dependent on people flying here.

SNA: What would you advise someone who is just developing an interest in literature, more precisely in writing?

OS: Read, read, and read. Someone who is interested in writing from here, what I would really want to say to them is, it is all there for the taking. What the world of literature is always looking for are new voices and new perspectives. I do not know of any Seychellois novelist who has broken out and has been published elsewhere in the world.

I know that the publishing industry would just love to have that novel, to have that book that goes so much deeper than just the idea that Seychelles is somewhere to go for a nice holiday. Everything that we were talking about - coastal erosion, the challenges. Appreciate what you have in your stories here, they are really special.