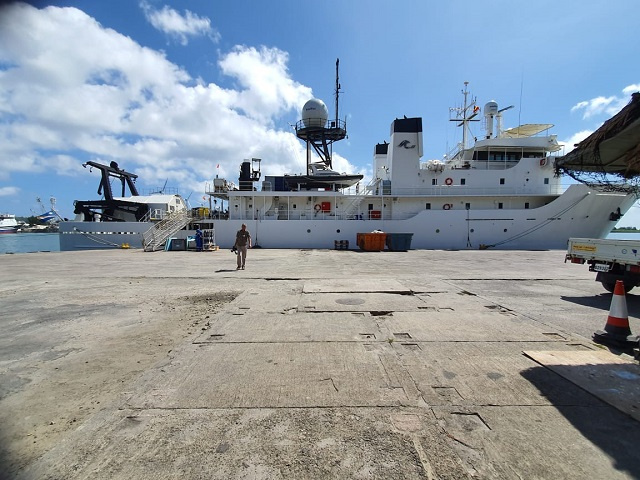 (Seychelles News Agency) - A joint Nekton deep sea expedition in the waters of Seychelles and Maldives will start on Tuesday to establish a baseline of marine life and the state of the ocean in both jurisdictions.

The 35-day mission will be led by a team of 50 international scientists from Nekton and the University of Oxford. This follows a similar successful mission in 2019.

The mission, called 'First Descent: Midnight Zone,' will be done by the Mothership DSSV Pressure Drop which will leave Port Victoria on Tuesday. The expedition will explore 1,000 to 4,000 metres below the surface where light barely reaches.

It will also undertake the first research of seamounts in this area of the Indian Ocean.

"With high levels of biological endemism, seamounts are often described as 'undersea Galapagoses' home to species found nowhere else on the planet," the Principal Secretary for Environment Alain Decommarmond told a news conference.

Seamounts are undersea mountains formed by volcanic activity and scientists estimate there are at least 100,000 of them higher than 1,000 metres around the world.

Decommarmond said that "in the last expedition the furthest we explored was between 250 metres to 350 metres in the deep sea. This time, the research will be focused on seamounts in the Midnight Zone."

The objectives of the research will be to support the sustainable governance of the Seychelles and Maldivian oceans including the protection of 629,000 km square and gather critical data to define conservation and management priorities and the designation of Marine Protected Areas

Two places in the Seychelles' Exclusive Economic Zone have been confirmed for the research and these are located at the north of Bird Island and an area called Coco de Mer limit.

The team will be carrying out research to gather critical data to define conservation and management priorities and the designation of Marine Protected Areas in Seychelles and in the Maldives. This year's expedition costs around $5 million and Seychelles will contribute around $22,000.

The manager and science programme for Nekton, Seychellois Sheena Talma, who also took part in last year's expedition, said that her mission now is to ensure that all science is being done on a daily basis and data are managed properly to be sent to Seychelles.

The expedition will be using the world's most advanced deep-diving submersible alongside a dozen research tools including landers, sampling, sensor and mapping technology.

In March last year, Nekton launched a two-month underwater exploration of depths up to 500 metres of the waters of Seychelles, a group of 115 islands in the western Indian Ocean.

During the exploration, President Faure became the first head of state to deliver a live address from a depth of 124 metres below the ocean surface during a submersible dive on April 14.

50,000 flip-flops among the 25 tonnes of trash cleaned up on Seychelles’ Aldabra Atoll