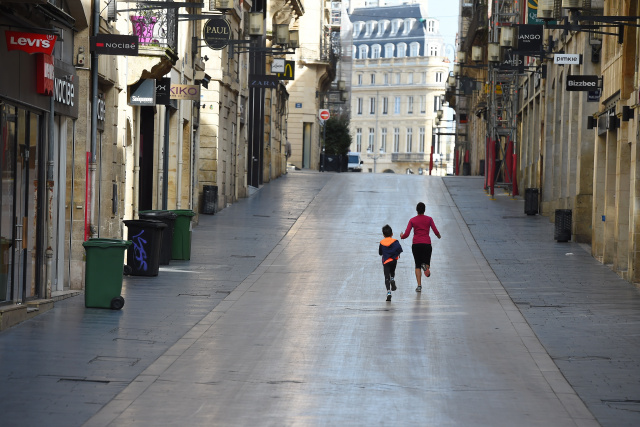 A woman and her son run in the deserted Sainte-Catherine street in Bordeaux, southwestern France, on March on 19, 2020, on the third day of a strict lockdown in France to stop the spread of COVID-19, caused by the novel coronavirus. A strict lockdown requiring most people in France to remain at home came into effect at midday on March 17, 2020, prohibiting all but essential outings in a bid to curb the coronavirus spread. The government has said tens of thousands of police will be patrolling streets and issuing fines of 38 to 135 euros (42-150 USD) for people without a written declaration justifying their reasons for being out. (NICOLAS TUCAT / AFP)

(AFP) - Western powers said they were on a war footing against the coronavirus as they unleashed nearly one trillion dollars to rescue the global economy, with Italy reporting the highest single-day death toll of the pandemic.

The spiralling crises in Europe, the United States and other countries contrast sharply with the improving situation in China.

China on Thursday reported zero new domestic cases for the first time since the outbreak first erupted in the central city of Wuhan in December.

But for most other places around the world, the pandemic was worsening quickly with the number of infections climbing above 200,000 and confirmed deaths nearing 9,000.

"I view (myself) as a, in a sense, a wartime president. I mean, that's what we're fighting," Donald Trump said Wednesday as he announced the deployment of military hospital ships to treat a fast-growing number of American patients.

German Chancellor Angela Merkel took a similar tone, echoing French President Emmanuel Macron who earlier this week compared the battle to war as he ordered his citizens to stay home.

"Not since the Second World War has our country faced a challenge that depends so much on our collective solidarity," Merkel said in a television address.

Dire news came out of Italy which reported 475 new deaths, the highest single-day toll of any country.

Italy has now recorded more than one-third of global deaths and has shut down all businesses and public gatherings -- steps that have been copied across the world.

"The main thing is, do not give up," Italian National Institute of Health chief Silvio Brusaferro told reporters.

With countries paralysed by the pandemic and stock markets imploding, policymakers have this week unleashed a wave of measures to shore up the global economy.

The European Central Bank on Wednesday announced a 750-billion-euro bond-buying scheme, days after it unveiled a big-bank stimulus package that failed to calm anxious markets.

Trump signed a $100 billion emergency aid package that sailed through Congress to provide free coronavirus testing for those who need it, sick pay and paid family leave.

Trump also invoked a Korean War-era law that allows the government to compel businesses to sign contracts -- which can be used to expand production of necessities such as protective masks.

However the moves, like other emergency stimulus measures in recent weeks, failed to ease the sense of impending economic doom.

Asian markets took another beating on Thursday, diving by eight percent in Seoul, 4.5 percent in Hong Kong and one percent in Tokyo.

With travel bans worldwide, Australia's Qantas airlines said it would halt all international flights while the head of Germany's Lufthansa warned that industry might not survive without state aid.

Countries are taking increasingly drastic steps to stem the flow of infections, with Australia and New Zealand on Thursday banning non-residents from arriving.

Canada and the US said Wednesday they were closing their border -- the world's longest -- to all but essential travellers for 30 days.

Britain, where Prime Minister Boris Johnson had initially chosen a different path, followed the lead of his European counterparts and said schools would shut nationwide from Friday as the death toll topped 100.

The European Union this week imposed a 30-day ban on travellers from outside the bloc.

Within the bloc some countries have sealed borders, while bars, restaurants and most shops have closed their doors until further notice, bringing life in Europe's normally bustling cities to a halt.

The Eurovision song contest and European football tournaments have been suspended.

In Jerusalem's deserted Old City, bakery-owner Marwan Shawar summed up the mood in a sombre tone: The virus "is worse than war. It's more dangerous. We are fighting against something unknown. Invisible."

Offering hope for the rest of the world, the rise in infections and deaths has slowed in parts of Asia.

China reported Thursday no new domestic cases for the first time since it started recording them in January.

About 56 million people in central Hubei province and its capital, Wuhan, have been locked down since late January.

Authorities have started to ease travel restrictions in Hubei, allowing people who have jobs in other parts of the country to finally leave.

But China reported 34 that came from abroad -- the biggest daily increase in two weeks.

Concerned about the influx, Beijing and other regions now require most international arrivals to quarantine in designated hotels for 14 days.

"We should never allow the hard-won and continuous positive trend to be reversed," President Xi Jinping said at a Communist Party leadership meeting.

Still, the first reported infection on the tiny Pacific island of Fiji and the first confirmed coronavirus death in Sub-Saharan Africa highlighted how the battles had only begun in other parts of the world.

The head of the World Health Organization, Tedros Adhanom Ghebreyesus, urged countries to "come together as one against a common enemy: an enemy against humanity."

He sounded a special alarm for Africa, saying the continent must "wake up" and prepare for the worst.

The Sub-Saharan Africa fatality was in Burkina Faso with the death of the first-vice president of parliament.

A slew of Latin American countries announced nighttime curfews, with Chile declaring a "state of catastrophe" and Cuba and Costa Rica recording their first deaths.