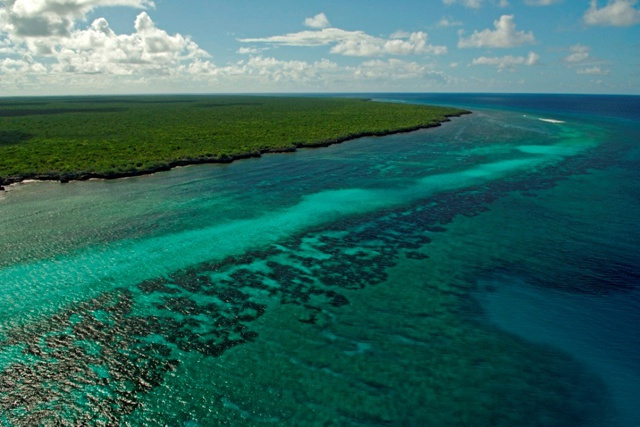 These areas include the waters surrounding the Aldabra group. (Seychelles Islands Foundation)

(Seychelles News Agency) - Seychelles has legally designated 30 percent of its territorial waters as marine protected areas 10 years ahead of international targets, President Danny Faure said at the signing of legal document on Thursday.

Faure said that with the signature and gazetting of the legal instruments "13 new areas will be declared as protected under the National Parks and Nature Conservancy Act, totalling an area of 410,000 square kilometres."

He added that half of these designate areas are of high biodiversity and gazetted as Marine National Parks where almost no human activity other than sustainable tourism will be permitted.

These areas include the waters surrounding the Aldabra group, marine areas in the Amirantes including D'Arros to Poivre, and the South of Amirantes and Bird Island, one of the only 2 sand cays in the inner island group.

The rest which falls within the Amirantes to Fortune Bank are of medium biodiversity and designated for sustainable use where activities vital to Seychelles' economy will continue to operate but will be managed under new sustainability regulations.

With the new designation, which is a product of the Marine Spatial Planning (MSP) process, Seychelles' protected area is now 410,000 square kilometres of the island nation's Exclusive Economic Zone (EEZ) of 1.4 million square kilometres.

The Seychelles Marine Spatial Plan is a government-led initiative following the award-winning debt-for-nature swap, which was formalised through the creation of the Seychelles Conservation and Climate Adaptation Trust in 2016.

The project manager of the plan, Helena Sims, said the plan is now transitioning from zoning to implementation.

Implementation begins in 2021 and "the government has already started to build this road. Today we witness Seychelles taking a huge step towards realising its long term vision for healthy oceans and a prosperous national economy."

"With fisheries and marine-based tourism being the two pillars of the country's economy then the ocean is central to Seychelles' development and for the future generations to come," said Sims.

Faure said that Seychelles' marine ecosystem is the foundation that the economy is built upon, with fisheries and tourism being the primary pillars of our economy.

"With over 1.35 million square kilometres of ocean, the people of Seychelles have a direct dependence on our ocean resources for food security and livelihoods. Developing a Marine Spatial Plan is a way of tackling the sustainable development of the ocean for today and future generations," he added.

There are currently 18 marine protected areas in Seychelles which have undergone the implementation stage, and six of them are marine national parks. There are also three fisheries management protected areas, three special reserves, one protected area, and four shells reserves.