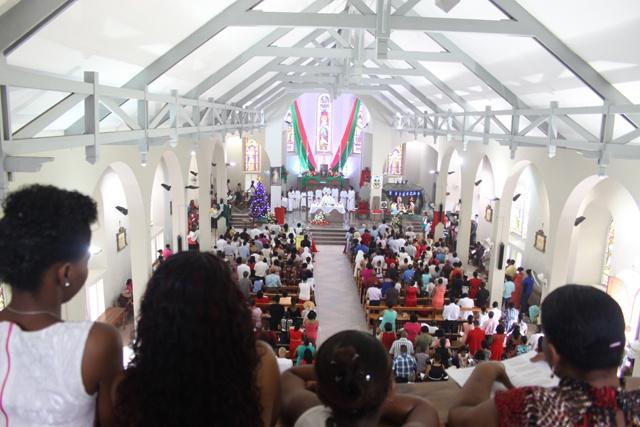 The bishop explained that parish priests will support bereaved families with leaflets of prayers for the burials. Even the burial is being restricted to family members and close friends only. (Seychelles News Agency)

(Seychelles News Agency) - The Roman Catholic Church of Seychelles has stopped all religious funeral services, fewer passengers will be allowed on buses, and public spaces are being given a good scrubbing.

The new measures effective this week are amongst latest efforts to contain COVID-19 after a state of Public Health Emergency was declared on Monday in Seychelles.

In a communique from the Catholic Church, Bishop Denis Wiehe said that members of the public must abide by the regulations which have been put in place. “This is quite a difficult decision as we are going through trying times but for us, in churches, we must understand this. For the health of our country we must abide by regulations,” said Wiehe.

The bishop explained that parish priests will support bereaved families with leaflets of prayers for the burials. Even the burial is being restricted to family members and close friends only.

On its part, the Anglican Church is still maintaining funeral services but this has been shortened to half an hour services with only family and close friends attending. Social distancing is also being enforced where only three persons are allowed to sit per bench.

“The Anglican Church is maintaining the funeral services according to the regulations. However the Diocesan Liturgical Commission has already worked on a shorter version of the funeral liturgy, which will be used for funeral services,” Reverend Christine Benoit told SNA.

Roman Catholic is the main religion of the Seychelles – 115 islands in the western Indian Ocean – with around 75 per cent believers whilst 6 per cent of the population are Anglicans.

As of last Friday last week, all masses and other religious gatherings including in mosques and temple are banned. Mass from the two main churches - the catholic and Anglican - is celebrated every Sunday morning with a handful of faithful and is transmitted live on the main television and radio stations.

The Seychelles Public Transport Company (SPTC) on Thursday announced that it will limit the number of passengers allowed to board buses. General Manager for Operations at the company said: “Drivers have been told not to take standing passengers as we are also playing our role to prevent the spread of the virus.”

Bernadette Sophola added that as there are fewer people in circulation fewer people can be seen on the buses. But passengers are also encouraged to take their responsibility and abide by new regulations. And as a way of reinforcing social distancing at the main terminals, the SPTC has demarcated benches to ensure that the one-meter is respected and crowding prevented.

Eight cases of COVID – 19 are confirmed in the island nation and maximum precautions are being taken to contain the virus and prevent community transmissions. As of this week, the Landscape and Waste Management Agency has started thorough cleanings of all bus stops of the main island and the second most populated island of Mahe and Praslin.

“We are doing the cleanings at night after the last bus service and we are doing thorough washing with disinfectants three times a week and as per guidelines from Public Health Authority,” Flavien Joubert - chief executive of the agency - told SNA.

The agency is also deep washing public benches and public toilets in the capital city of Victoria daily. Joubert added that ´all surfaces that the public has contact with at these sites such as door handles are also being disinfected.”

The CEO said that the cleaning of litter bin sites in Victoria has also increased from once weekly to three times per week. An additional $35,000 per month is being spent to implement these new hygiene measures, something the Landscape and Waste Management Agency say they have no choice but do to protect the population from COVID–19.