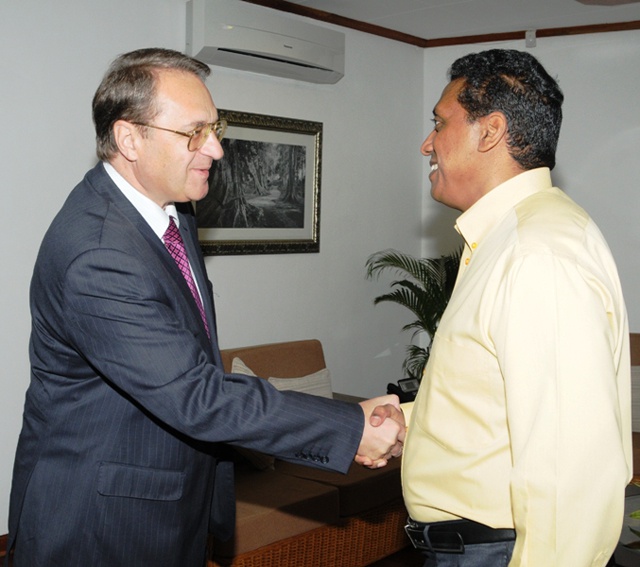 The special representative of the President of the Russian Federation for the Middle East, Mikhail L. Bogdanov, with Seychelles Vice-President James Michel (Seychelles Nation)

(Seychelles News Agency) - The special representative of the President of the Russian Federation for the Middle East, Mikhail L. Bogdanov, was in Seychelles last week to deepen diplomatic ties between the two nations.

According to a report in the Seychelles Nation, the envoy, who is also the Russian Deputy Minister of Foreign Affairs, called on Seychelles Vice-President Danny Faure to discuss “pertinent issues of mutual advantages.”

The Russian Federation represents a growing chunk of visitor arrivals from Europe. The tropical Indian Ocean archipelago is regarded as a firm favourite for honeymooners from Russia.

In 2013, Russian tourists to Seychelles numbered just under 14, 500, in fourth place behind France, Germany and Italy. Russian investment in the archipelago's tourism industry also includes several world-class hotels, including the five-star Savoy Resort and Spa in Beau Vallon.

“Seychelles and Russia have enjoyed diplomatic relations since Seychelles gained its independence in 1976 and in 2016 we are going to celebrate 40 years of this relationship,” said Bogdanov. “The prospect of our relationship is very promising. We have been developing the humanitarian and educational aspects of our interaction. And for a fact, over the years a number of Seychellois have studied in Russia.”

The Russian deputy minister added that aside from deepening diplomatic ties and trade, the Russian business community was “vividly interested” in investment opportunities in Seychelles, including the field of hotel development.

Bogdanov also paid a visit to Designated Minister Vincent Meriton, who is also the Minister for Social Affairs, Community Development and Sports, where potential opportunities for bilateral cooperation were explored further, including the fields of education, tourism, parliamentary exchanges, maritime security and military and law enforcement training.

Both countries have expressed interest in working on a bilateral air services agreement to increase tourism and trade opportunities further and underlined their common commitment to fighting piracy in the region for greater stability.