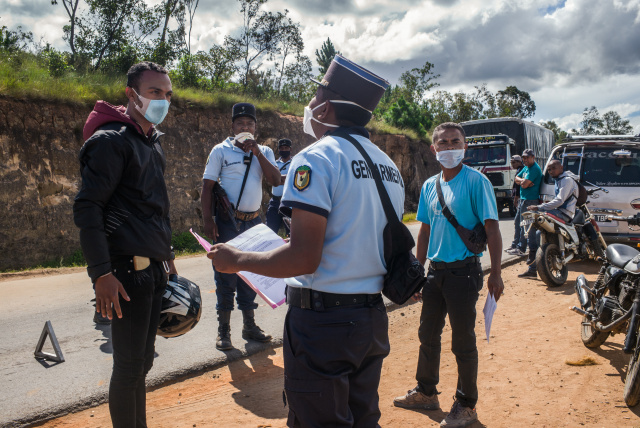 Health authorities and police forces stop pedestrians and southbound vehicles some 20km south of Antananarivo to check their temperature and the reason for their movement on March 27, 2020 on the national road 7 leading to the South of Madagascar. Several Antananarivo residents have decided to leave the capital to return to their place of birth for fear of the COVID-19 epidemic or because they have lost their jobs as a result of the lockdown of the city ordered by the authorities since 23 March 2020. (RIJASOLO / AFP)

(AFP) - No one can remember ever seeing as many people heading out of Antananarivo along national highway number 7.

Madagascans have joined the exodus in their hundreds in recent days, forming long queues to get away after the authorities declared a lockdown to try to prevent the spread of the coronavirus epidemic.

Richard Rakotoarisoa hit the road during the morning, surrounded by dozens of other people who have decided to head south on foot, rather than risk being stuck in the city with little or no food.

"We stopped work and and accepted the constraints of confinement, but we still have to eat and feed our children," the 30-year-old father, says.

"For me, it was a question of discipline or leaving."

Before dawn, he woke his two children and loaded a bicycle with what he could and set off for the town of Antsirabe, 150 kilometres (90 miles) away, expecting a three-day walk to join his wife and the rest of their family there.

"We don't really know when we will get there, but we are preparing to spend several nights on the road, sleeping under the stars," Rakotoarisoa says.

There is no question of going back. "In our village, our parents are farmers. We can live off what we grow. In the capital, under confinement we would just be waiting till hunger takes our lives."

Across the African continent, the spread of the COVID-19 pandemic, which has already left nearly 28,000 people dead around the world according to an AFP tally, has sparked the same mass movement of populations.

In Kenya, as soon as the first case of the virus was confirmed on March 13, people flooded from the capital Nairobi by car and packed into the local "matatu" (minibus) heading for the countryside.

The surge has since slowed, but the brightly painted matatu are still in demand even if the official capacity of the vehicles has been cut in half for health reasons.

"We must move," says Jerry Musyoka, who runs an electronics store.

"This city is not safe for us, that is why I am moving to the village" with his wife and two children. "We don't wan't to catch corona," he adds.

"The kids have been ordered to stay home because there is no school, I have taken time off to stay away with my family in my village," called Kitui, which lies 150 kms to the east.

The Kenyan government imposed a night curfew from Friday, but for many citizens a lockdown order is coming soon.

"When you look at what other countries are doing, we must expect a total lockdown here. I will not wait for it," admits lawyer Johnson Makori. "I have closed my office for now and I am going to the village in Kisii." He says he will not be back before the crisis is over.

Unlike Kenya, numerous other African countries have reacted swiftly to the risk of migrations.

Gabon, which has declared seven virus cases and one death in the capital Libreville and its surrounds, suspended domestic flights and train services while urging people not to take off for the countryside.

"These measures should slow the spread of the virus ... to the villages where the majority of the elderly and most vulnerable live," says Dr Guy Patrick Obiang Ndong, spokesman for the government's committee to fight coronavirus. Gabon could also count on the terrible state of its roads to discourage people from setting off.

Relatively few tests have been carried out in Africa but with 3,203 cases and 87 deaths already reported across the continent, the disease is feared to be spreading widely.

Ivory Coast, Burkina Faso and the Democratic Republic of Congo have taken the more radical decision to isolate their biggest towns and cities.

The governor of Kinshasa has ordered a lockdown, telling the capital's 10 million people to stay at home from Saturday for at least the next four days. President Felix Tshisekedi had already halted flights and river transport between the city and the rest of the country earlier during the week.

However, that failed to stop the spread of the novel coronavirus to the northeastern province of Ituri, which has recorded the first case outside Kinshasa.

In Madagascar, the health authorities have had a roadblock set up on highway 7, about 40 kilometres (25 miles) south of the capital, in a bid, they said, to detect people "fleeing" with the virus.

"More than 2,000 people have gone through this roadblock this morning," Dr Hanitriniaina Radrianarison said on Thursday. "So far, no one has shown a temperature higher than normal."

The gendarmes are also checking vehicles to try to cut the flow of people down the RN7, but plenty of people are still trying.

Bread delivery man Justin Randriamahefa, 35, his wife and two children got out of Antananarivo on bicycles and headed for the town of Ambositra, 250 kilometres (155 miles) away. "I could work only in the morning. That forced me to leave," he says. "You cannot let your children die of hunger."