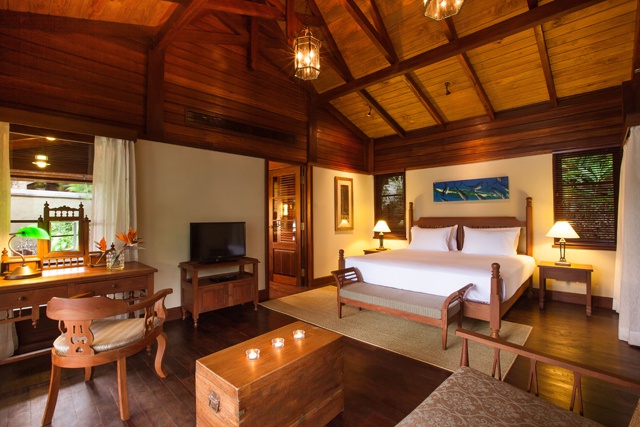 (Seychelles News Agency) - Enchanted Island Resort, a newcomer to the Seychelles tourism industry, which started to receive its first guests in December last year, has been dubbed a beautiful example of a Seychellois family claiming back the industry.

Seychelles Tourism and Culture Minister, Alain St Ange congratulated the Shah family for having invested in the local tourism industry at the official opening of the new Resort on Friday evening.

“Today, we are proud to see that a Seychellois family have taken a bold step forward to claim back ownership of our tourism industry by committing themselves to the construction of this new resort on this enchanted island with its breathtaking 360 degrees view of surrounding islands and the blue turquoise oceans around it whose rich marine life has been protected under our conservation law,” said St Ange.

He added that the Seychellois ownership of small, medium and large tourism establishments blends in with the policy of the archipelago’s tourism ministry to add the creole touch to the product and services provided to our visitors.

Enchanted Island Resort which is managed by the Dubai- based Jebel Ali Resorts & Hotels (JA Resorts & Hotels) is found on Round Island in the Sainte Anne Marine National Park, a 10 to 15 minute boat ride from the main island of Mahé, in the Seychelles archipelago.

The island resort is owned by a Seychellois family of Indian origin. Sunil Shah and his father Anant Jivan-Shah known as AJ, built the resort, which took 5 years and nearly $9 million worth investment by the family, which also has an accounting firm AJ Shah& Associates in Victoria, capital of the Seychelles.

Sunil’s grandfather Jivan Shah arrived in Seychelles in 1894, having travelled from Kutch, in northwest of India in Gujarat, coming to work in the trading business in the islands, which at the time were a British colony. Sunil’s uncle is the late Seychellois historian, Kantilal Jivan-Shah.

Speaking on behalf of his family Sunil Shah described the new resort as a dream come true, as both his father AJ Shah and him had always wanted to preserve the traditional Creole architecture, interior décor and furniture – thus the concept of the 10-villa resort sprawled all over the island.

The intricate design of the resort by Indian architect Tony Joseph took into consideration the preservation of the environment which had no impact on its natural forests, fauna and flora.

In order to design the resort, a topographical and aerial photography survey was undertaken of Round Island, which is on lease to the Shah family from the Seychelles government, to demarcate each and every tree, boulder or landmark such as the World War Two bunker now converted to the resort’s boutique.

JA Resorts & Hotels’ Chief Operating Officer, David Thompson said that the management company was pleased to have been associated with the Enchanted Island Resort as this was the first hospitality property they manage in the Indian Ocean apart from Dubai.

Enchanted Island Resort has Danish-born Lilli Fiigaard as its General Manager and she overlooks a team of some 30 staff of various nationalities mostly Seychellois.

Some of the features of the Enchanted Island Resort include the around hundred and fifty pieces of old furniture, which were restored in India and have been used throughout the resort. There are also a dozen of the owners' antique posters bought in auctions, some dating back to the early 20th century that have been used a décor in the public areas.

Local fruits are grown on the island such as breadfruit, star fruit, pineapple and pomegranate, and the villas are named after plants in the Creole langue, ‘Bamboo’ ‘Ibiskis’, ‘Bodamier’. The Shah family have integrated some 20,000 into the jungle on Round Island.

Among its first celebrity guests since Enchanted Island Resort opened its doors in December last year was The Rolling Stones’ Ronnie Wood and his new wife Sally Humphries.

Wood sketched artworks while on the island during his three week stay, and donated one of them to the 5 star luxury resort, which has only 10 villas, each with its own pool, and beach access.