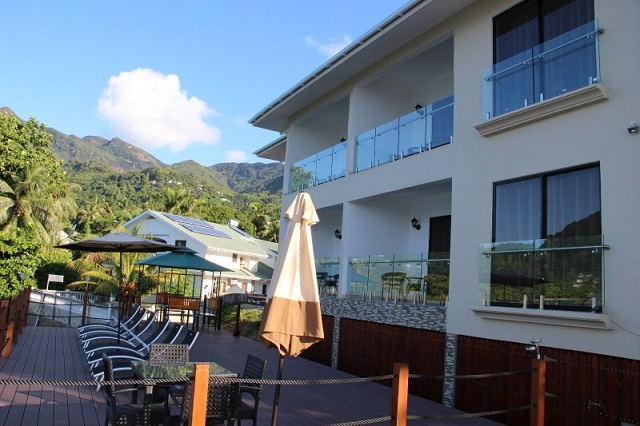 Surfers Cove with four one-bedroom apartments is a self-catering establishment opened in May 2017. (Surfers Cove Self Catering Apartment)

(Seychelles News Agency) - Tourism establishments in Seychelles have welcomed measures and financial support being put in place to assist the worst-hit sector of the economy amid COVID-19.

Business owners SNA spoke to said that whilst it is clear that special budget provisions have been made to pay salaries and grace period over loans repayments offered, it is not clear whether all tourism-related services in the industry will benefit.

Since the outbreak of COVID-19, the number of visitors to the islands has been dwindling as many countries went into lockdown, closed their borders and banned their citizens from travelling. Sybille Cardon, the chairperson of the Seychelles Hotel and Tourism Association (SHTA), described the industry as ‘dead’. “It is the first time in Seychelles’ history that the tourism industry encounters such a situation,” explained Cardon.

“The announcement that the government will take over the payment of salaries of employees in the private sector has been well received and will help us a lot,” said Cardon. The hotelier added: “Prior to the announcement of measures, many tourism establishments had been preoccupied over how they were going to pay their employees given that their revenues over the next coming months will practically be non-existent.”

The Ministry for Tourism has during this week been in contact with several small self-catering establishments in the north of the main island of Mahe. This was to discuss the current situation of  COVID-19, its impact as well as informing them of the measures that the government has put in place to provide support to the industry.

Barbara Focktave, the owner of Surfers Cove, told SNA that she has welcomed the support. “We have been empty since the middle of this month and our worries had to do mainly with our business loan, but now we have been informed that we will benefit with a grace period of six months for the repayment.”

Surfers Cove, comprising of four one-bedroom apartments, is a self-catering establishment opened in May 2017. Foctave added that the minister Didier Dogley personally spoke to her to explain these measures, something she said will help to boost the morale of those directly affected.

Dominique de La Fontaine of La Fontaine Holiday Apartment said that his worry has to do with keeping all his staff. “Laying off employees is not an option. I hope that we can be fully supported until the situation ends.” De La Fontaine said that his apartments are all almost all empty except for two visitors who are still waiting to be repatriated home. Something which is becoming almost impossible with all airlines pulling out.

On the third most populated island of La Digue, Laura St Ange of Chez Marston said that she is still waiting to get information on how her business will be assisted. “We have heard that an office will be opened here next week which will facilitate us to get assistance, so I hope to get some insight of support there,” said St Ange, whose businesses includes two guest houses and a restaurant.

Car rentals, boat excursions, tourist guides are other businesses severely being impacted and these businesses are not clear whether they will be assisted.

“Our company currently employs 15 people and we are involved in water sports and boat charter. I am still in the dark on how we will be supported,” Lydia Bastienne of Mamila Charters and Watersports told SNA. Bastienne said that the company had to stop all its activities two weeks ago when Beauvallon – the most popular beach for visitors on the main island – became deserted.

Early this week it was revealed that a survey carried out in Seychelles - 115 islands in the western Indian Ocean - showed that at least 2,367 bookings worth $3.8 million were cancelled between February 25 and March 23 due to the COVID-19 pandemic