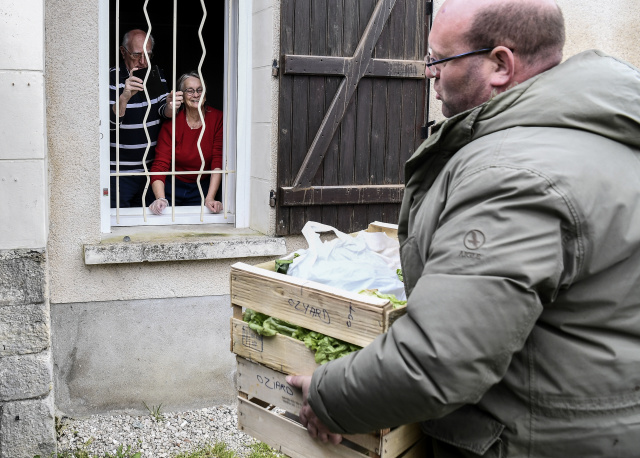 A French farmer delivers orders to customers on March 29, 2020, in Civray-de-Touraine, near Tours, on the thirteenth day of a lockdown aimed at curbing the spread of COVID-19 (novel coronavirus) in France. (ALAIN JOCARD / AFP)

(AFP) - More than 3.38 billion people worldwide have been asked or ordered to follow confinement measures in the fight against COVID-19, according to an AFP database Sunday.

That represents around 43 percent of the total world population, which is 7.79 billion people according to a United Nations count in 2020.

The Chinese province Hubei and its capital city Wuhan, the first epicentre of the novel coronavirus, were the first to introduce confinement measures at the end of January.

As Hubei province starts opening up again after its months-long isolation, confinement measures have multiplied worldwide in recent weeks.

On March 25 more than three billion people were affected by confinement measures in some form.

On Sunday at least 3.381 billion people in at least 78 countries and territories have been called on to stay at home.

Most of those -- at least 2.45 billion people in 42 countries and territories -- are under obligatory confinement.

No region in the world is excluded.

In Europe, the affected countries include Britain, France, Italy and Spain. In Asia, India, Nepal, Sri Lanka and more are affected, while many nations have measures in the Middle East including Iraq, Jordan, Lebanon, Israel.

In Africa, South Africa, Morocco, Madagascar, Rwanda and more are affected. In the Americas, confinement measures are in place in Colombia, Argentina, Peru and more, including a large part of the United States. In Oceania, New Zealand has imposed a lockdown.

Congo-Brazzaville and two regions in Ghana will also join the list early next week.

- Varying measures according to country -

In most cases people are allowed to leave their homes to work, buy essential goods or for medical treatment.

At least nine countries or territories -- comprising some 511 million people -- have urged their populations to stay home without imposing threats of punishment.

These include Germany, Iran, Russia and Uganda.

At least 21 other countries or territories -- comprising some 384 million people -- have imposed evening curfews.

Saudi Arabia, Serbia and the city of Manila in the Philippines have also imposed curfews.

At least seven countries have put their main cities under quarantine, barring populations from entering and exiting.

This is the case for Kinshasa in the Democratic Republic of Congo, Riyadh, Mecca and Medina in Saudi Arabia, Helsinki in Finland, and Baku in Azerbaijan.