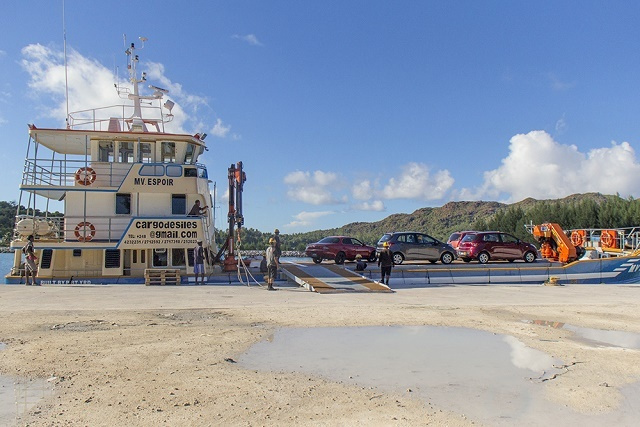 Rose owner of MV Espoir -- a vessel that has the capacity to carry 275 tonnes per day, said that the company is operating only three trips per week compared to five trips prior to the outbreak of COVID-19. (Salifa Karapetyan, Seychelles New Agency)

(Seychelles News Agency) - Cargo service between the main islands of Seychelles is struggling, losing money daily now that tourism establishments have closed in response to COVID-19.

Gerard Rose of MV Espoir and Luc Grandcourt, owner of Praslin Hero and La Belle Praslinoise II, both told SNA that business has dropped this month, resulting in reduced trips to save operational costs.

"I fear that if things do not improve in terms of the spread of this virus, we will find ourselves in a worse situation than what we were in back in 2008," Rose told SNA on Monday.

In 2008, as tourism and fishing revenue began slowing, Seychelles defaulted on $230 million in debt. The International Monetary Fund stepped in with a two-year, $26 million rescue package. The rescue package came with a few stipulations; the country laid off 1,800 government workers and floated its currency resulting in a higher cost of living.

Rose, whose vessel has the capacity to carry 275 tonnes per day, said that the company is operating only three trips per week compared to five trips prior to the outbreak of COVID-19.

"Our main clients were hotels as they bought in bulk from large suppliers such as ISPC or even import directly from overseas and we could bring that to Praslin daily," explained Rose, who is based on the second-most populated island of Praslin.

Grandcourt, also based on Praslin, said that both his vessels were offering cargo services between the inner islands of La Digue, Silhouette, Praslin and the main island of Mahe.

"But now we are operating only one ship at a time and our cargo is mostly goods. We also used to carry a lot of construction materials as well, but now we see this situation as only maintaining our services and not necessarily making profits," explained Grandcourt.

Between them, the two companies provide jobs to 80 people amongst which half are full-time employees and half are employed on a casual basis. "We are running at a loss. Just to give you an idea, the vessel uses $580 worth of fuel every day, and nowadays we are making an average of $725 per day. So when we consider salaries, there is no profit," said Rose.

Even though the demand for cargo transfer between the islands has gone down, Grandcourt and Rose said they will maintain services for their clients, especially where transporting food items and basic commodities are concerned.

Boats are the most effective and cheapest routes between the islands of the archipelago especially the inner islands where these are available all day, every day.

Both entrepreneurs are troubled as to how quickly the pandemic has impacted Seychelles – 115 islands in the western Indian Ocean, its economic activities and the livelihoods of its people.

"I hope that things can get back to normal in the next couple of months because if by July we are in the same position, it will be a catastrophe for the country," said Rose, who has been in this business for over 40 years.

Ten days ago the head of state, Danny Faure, announced a series of measures, targeted mostly to the private sector which he said will keep Seychelles' economy afloat.