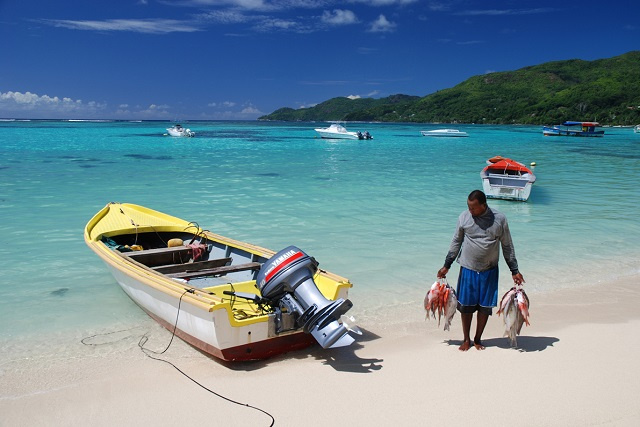 Bastienne said there are about 500 fishing vessels involved in artisanal fishing in the country. (Gerard Larose, Seychelles Tourism Board)

(Seychelles News Agency) - Seychelles will help local artisanal fishermen find a market for their catch to ensure food security in the country, the Minister of Fisheries and Agriculture says.

"Under the plan, we want to make sure that our artisanal fishermen continue to fish and we know that at the moment they are having difficulties selling their catch. Under the plan we need to make sure that there is a guaranteed market for them to sell their fish at reasonable prices," the minister, Charles Bastienne, told a news conference Monday.

To be eligible to participate in the programme, fishermen have to be registered with the Seychelles Fisheries Authority (SFA). Processors to whom the fishermen will be selling their catch will also have to register with the authority.

Each fish type will be sold to processors at a pre-agreed-upon price, which will later be processed into different products. These products will be sold to the Seychelles Trading Company (STC), who will, in turn, be responsible to supply retailers, ensuring fish products are available in shops.

Bastienne added that the three-month plan to be revised according to change in the COVID-19 crisis is essentially aimed at artisanal fishermen. According to the website of the fishing authority, artisanal fishery is characterised by a wide variety of boats using different gears and catching various species within the Exclusive Economic Zone of the archipelago in the western Indian Ocean.

All the artisanal fishing vessels target demersal resources such as snappers, groupers, Indian mackerel, rabbitfish, emperors, barracuda and jackfish. Normally, the catches are supplied demand on the local market including hotels and restaurants and some species are designated for the export market.

Bastienne said there are about 500 fishing vessels involved in artisanal fishing in the country, employing about 1,500 people.

"On a monthly basis, we catch about 400 tonnes of demersal fish. Fifty percent of the 400-tonne would normally have been sold to hotels and restaurants and the other 50 was being consumed by the population," said Bastienne.

With most hotels having halted their operation and restaurant seeing a decrease in customers due to the pandemic, some fishermen have lost a market for their catch.

The Chairman of the Fishermen and Boat Owners Association (FBOA), Beatty Hoarau, said he is satisfied with the programme the government has put in place. He added that he has made sure to bring forward all the concerns of artisanal fishermen as.

"The main problem that we had was that fishermen need to get back to work. We discussed with the minister on how we can resolve this problem. We have established a price that we consider to be reasonable at which fishermen can sell their catch," said Hoarau.

"All the industries are in a crisis and it is normal for us to come together and find how we are going to survive during this crisis. I am happy that we have addressed the cost of operation that enables a vessel to go out to sea," he continued.

All artisanal fishermen participating in the programme will get ice at half the price that it is selling at the moment, going from SCR30 for 60 kilos to SCR15 for the same amount.

"Secondly, fishermen have told us that bait today sells at SCR 15 a kilo. SFA will come in and will be the authority responsible to sell bait and we do not expect the price to be higher than SCR5 per kilo. Combined, this will help bring down the price of operation for the fishermen. I've been told that the cost of ice and bait amount to about 40 to 45 percent of operational cost," said Bastienne.

The minister expects artisanal fishermen to go out to sea before the end of the week.