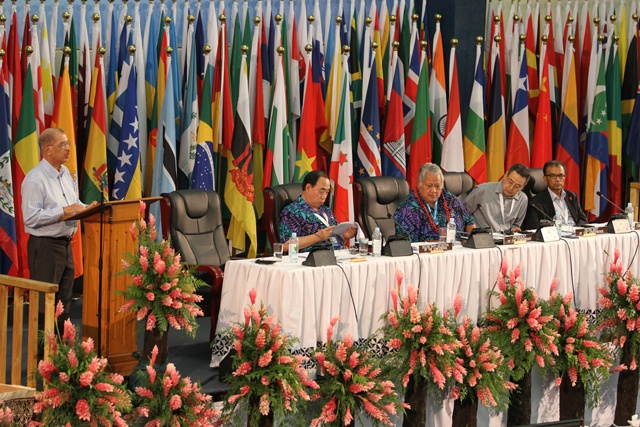 (Seychelles News Agency) - Seychelles President James Michel has presented 4 major proposals for the sustainable development of small island developing states, in his address at the opening of the third international conference on SIDS which got underway this morning in Apia, Samoa.

According to the United Nations, the conference is being held in the Pacific to demonstrate first-hand the challenges and opportunities facing countries in the small island developing states group.

These include high costs for energy and transportation, susceptibility to natural disasters, and vulnerability to external shocks.

“We have come here not to beg but to assert our right. Our right to a decent life. Our right to survival in an increasingly cynical and manipulative world, dominated by big business. Our way of life that we want to bequeath to the children of our islands and their children. Our right to development that enriches our quality of life and the essence of our being over and above purely commercial considerations. Our right to exist,” said Michel in his address this morning.

According to a statement issued by State House this afternoon, the Seychellois head of state noted that "the globalisation of development measures wealth and forgets people, through indices such as GDP per capita."

Michel’s first proposal to ensure sustainable development of SIDS called for the Samoa meeting to ensure that islands get development options that are adapted to their needs.

He suggested the adoption of vulnerability criteria to allow islands to invest to build resilience against global shocks.

“We need a vulnerability or resilience index to be built-in to the UN and global development architecture. This will not only benefit SIDS. It will ensure that development as a whole is more targeted and more effective,” said Michel.

A model of development that is ocean based rather than land based for SIDS is the second proposal made by the Seychellois head of state noting that islanders are ocean nations.

“……The oceans are our life-source, the pulse of our survival, and the catalyst for building a new development model that builds on our strengths whilst reducing our weaknesses," he said.

The Seychellois head of state noted that Seychelles hosted a first Blue Economy Summit in partnership with the UAE in Abu Dhabi in January this year.

“At this summit we agreed to harness our oceans to accelerate our ability to produce food and energy, whilst also diversifying our economies. To achieve this we need research and technology transfer,” he said in the statement.

Michel also spoke about the need to have more affordable financing for SIDS which he said are often faced with unsustainable debts.

“……While large middle income countries can often get very affordable credit through commercial terms based on the size of their internal markets and their assets, SIDS see the cost of their small populations and their isolation directly reflected in the applied interest rates.”

Climate change is another important issue addressed by Michel where he called for more decisive actions adding that 2015 must be the year where the world ends the debate and rhetoric on climate change.

“It is time that we recognise climate change for what it is: a collective crime against humanity. Climate change will be the single largest reason for displacement of peoples in the next 50 years. Climate change is already robbing a generation of its livelihoods.  Climate change is robbing island nations of their right to exist. We must save our future together,” he said.

According to the statement issued by State House, Michel also attended the Alliance of Small Island States Leaders meeting, together with the United Nations Secretary General Ban Ki-moon, prior to the opening of the SIDS conference.

“The AOSIS leaders adopted a declaration with a strong position on the Post-2015 Development Agenda, the Blue Economy and against climate change,” read the statement.

The Samoa conference which is bringing together some 3,000 dignitaries from 193 UN member states will end on Thursday September 4.

Over the four days heads of state, ministers, private sector businesses, academics, NGOs and journalists from all over the world will be engaged in discussing small island issues.

‘The sustainable development of small island developing states through genuine and durable partnerships’ is the theme chosen for the gathering.

The third international conference on small island states is the last high-level UN event that is scheduled before the United Nation Secretary-General’s September Climate Summit in New York.