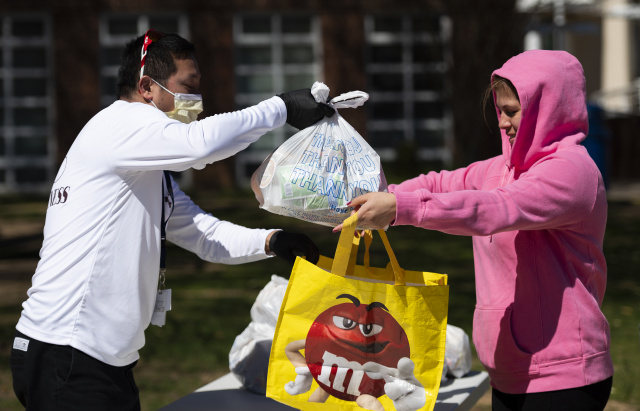 An Arlington county school volunteer hands out a weeks worth of lunches before the start of Spring break to help families that depended on school lunches during the coronavirus, COVID-19, pandemic, in Arlington, Virginia on April 3, 2020.(ANDREW CABALLERO-REYNOLDS / AFP)

(AFP) - President Donald Trump on Friday recommended that Americans cover their faces with masks when outdoors, a policy U-turn following growing scientific research suggesting their widespread use can stem the spread of the coronavirus.

Trump told a White House briefing that the Centers for Disease Control and Prevention (CDC) was urging people to wear face coverings like scarves or homemade cloth masks, but to keep medical-grade masks available for health workers.

"It's going to be really a voluntary thing," he underlined. "You don't have to do it and I'm choosing not to do it, but some people may want to do it and that's okay."

The about-face was widely expected after senior health officials told reporters the scientific evidence had evolved.

Speaking to Fox News on Friday, Anthony Fauci, head of infectious diseases at the National Institutes of Health, cited "recent information that the virus can actually be spread even when people just speak as opposed to coughing and sneezing."

Days earlier, the CDC's Robert Redfield said up to a quarter of people who are infected may be asymptomatic.

Taken together, the developments represent powerful arguments in favor of the widespread use of facial coverings.

Previously, the advice was that masks should only be used by sick people and their caregivers.

The new recommendations are in line with those made by France's National Academy of Medicine on Friday, and by New York Mayor Bill de Blasio a day earlier.

But the message was undermined by the fact that none of the officials present at Friday's briefing were following it.

Trump said he would not be wearing one "as I greet presidents, prime ministers, dictators, kings, queens, I don't know, it somehow, I don't see it for myself."

Fauci's comments about the virus's spread via breathing came after the National Academy of Sciences (NAS) sent a letter to the White House on April 1 summarizing recent research on the subject.

It said that though research isn't yet conclusive, "the results of available studies are consistent with aerosolization of virus from normal breathing."

Until now, US health agencies have said the primary pathway of transmission is respiratory droplets, about one millimeter in diameter, expelled by sick people when they sneeze or cough.

These quickly fall to the ground around a meter (three feet) away.

But if the virus can be suspended in the ultrafine mist people expel when exhaling -- in other words, an aerosol -- it becomes much harder to prevent its spread.

A recent NIH-funded study published in the New England Journal of Medicine found that the SARS-CoV-2 virus could become an aerosol and remain airborne for up to three hours.

The paper received widespread attention even as critics said the findings were overblown because researchers had used a medical device called a nebulizer to deliberately create a viral mist, something they argued would not occur naturally.

The NAS letter pointed to preliminary research by the University of Nebraska Medical Center that found the genetic code of the SARS-CoV-2 virus, its RNA, in hard-to-reach areas of patients' isolation rooms.

The NAS scientists also cited two other studies -- both not yet peer reviewed -- from Hong Kong and mainland China.

The Hong Kong researchers had some patients with coronavirus and other viral respiratory illnesses wear masks, while other patients in the study didn't cover their faces.

They found fewer droplets and aerosols from coronavirus patients who wore masks.

The Chinese paper raised concerns that personal protective gear used by health workers could be a source of airborne virus.

The team studied hospitals in Wuhan and found two major areas where the virus was aerosolized: patient bathrooms and rooms where medical staff removed protective gear.

This may be because doffing protective gear causes particles to get re-suspended in the air. Even if these particles are not of breathable size, they could settle on people's hands and bodies, the NAS panel said.

So far, the World Health Organization has been more cautious on the airborne threat.

In an analysis published on March 29, it wrote that aerosol transmission was only known to occur during particular medical treatments that required assisted breathing.