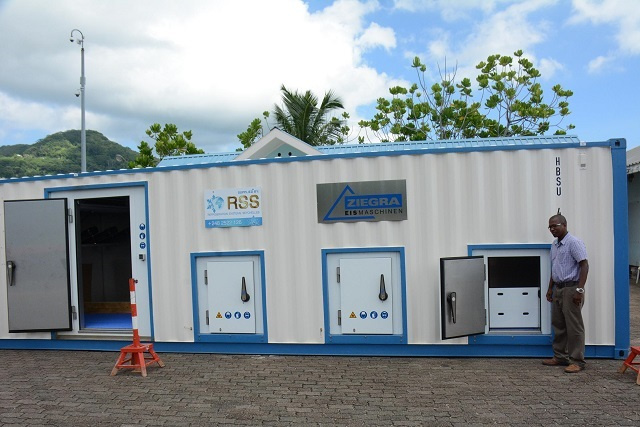 One of the German-made ice plants purchased by SFA in 2015. (Joena Meme)

(Seychelles News Agency) - A new plan to bring down the operational costs of artisanal fishermen in Seychelles has become operative, said a top official.

The interim chief executive of the Seychelles Fisheries Authority (SFA), Cyril Bonnelame, told a press conference on Monday that the authority has looked at ways to bring down the cost of ice and bait being sold to fishermen.

"This attempt will, in turn, be reflected on the price at which fishermen are selling their fish to local processors. Then the processors will incur this benefit to consumers," said Bonnelame.

Another factor that will ensure that the prices of fish product remain affordable on the local market is the price of fuel which has also dropped.

He said that the plan was also to guarantee a market for fishermen to sell their fish at reasonable prices.

Bonnelame said that to be eligible for the programme, fishermen have to be registered with SFA and processors who buy the fishermen's catch also have to register with the authority.

A boat owner, Kenneth Hoarau, told SNA that he welcomes the new approach as boat owners have been facing a lot of problems to find an outlet to sell their fish.

"It has been almost one month now since I sold my last catch to Oceana Fisheries. Then they told us that they would not be taking anymore. As of now, we have not received any feedback when to start selling to them again," he said.

Hoarau, who resides in the northern Mahe district of Beau Vallon, said the rate set for selling their fish to processors such as red snapper could be relooked at to ensure a win-and-win situation.

Normally the catches supply demand on the local market including hotels and restaurants and some species are designated for the export market.

With most hotels having halted their operation and restaurants seeing a decrease in customers due to the pandemic, some fishermen have lost a market for their catch.

There are about 500 fishing vessels involved in artisanal fishing in the country, employing about 1,500 people.